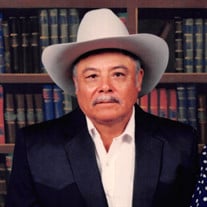 Progreso- Pedro Garcia, 80, passed away on Monday, October 26, 2020, at Knapp Medical Center in Weslaco. Pedro was born on August 1, 1940, to Simon Garcia and Trinquilina Saldana Garcia in Mexico. Pedro married his childhood sweetheart, Atanacia “Nacha” Villanueva, in 1969. They moved to Progreso in 1972, where they raised their family and spent the rest of their lives together. Pedro and his wife worked together in the fields as young adults. After they started their family, Pedro went to work for H&H Meat Market as a butcher, and Nacha could be a homemaker. After many years with H&H, Pedro went to work for Roberson Pools until he retired in 2002. Pedro was a very hard worker and kept busy most of the day. He raised chickens, took care of lots of animals, and kept an elaborate garden. He enjoyed being outdoors and was a great provider and father. Pedro was cheerful and always there for anyone who needed him. Pedro is preceded in death by his parents, Simon and Trinquilina Garcia, his loving wife, Atanacia “Nacha” Garcia, and brother, Juan Garcia. He is survived by his daughters, Veronica Garcia of Weslaco, Lucy Gonzalez (Marcial) of San Juan, and Benancio Garcia (Maria Loa) of Progreso, brothers, Rito, Alfonso, Luis, and Zenaido Garcia, grandchildren, Jessica Marie, Daniel (Mariana), Julissa, and Priscilla Garcia, Julian, Isaac, MaKayla and Gabriella Gonzalez, Angel C. and Anika B. Olvera, six great-grandchildren, Daniel, Denise, and Danny Garcia, Saul Jr., Kaylee, and Kathleen Munoz. Visitation will be Wednesday, October 28th, 10:00am - 9:00pm at McCaleb Funeral Home in Weslaco. Graveside service will be Thursday, October 29, 9:00am, at Highland Memorial Park in Weslaco.

The family of Pedro Garcia created this Life Tributes page to make it easy to share your memories.