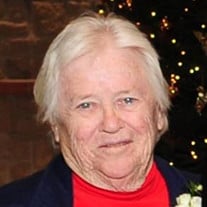 Donna- Phyllis Ann Montgomery, 82, went home to be with the Lord on Sunday, January 19, 2020, at Doctor’s Hospital in Edinburg. Phyllis was born at her grandma’s house in Orchard, Nebraska, to Milford and Verna Wehenkel. Phyllis was brilliant, enjoyed riding horses, and had a natural drive for success. Never a typical girl, Phyllis was always at her dad’s side, helping him set up for the local rodeos. She was a tom-boy and worked just as hard as the boys. Phyllis’s father, Milford, had a small business working as an electrician and refrigeration specialist, and she became his helpful sidekick for most of her childhood and as a young adult. In high school, she excelled in the marching band, playing the clarinet. Phyllis was fortunate enough to play in a very competitive marching band and they traveled to many competitions, which she loved. Phyllis graduated from Neligh High School as the valedictorian. Shortly after graduation, Phyllis met Robert Montgomery at a local dance. He had returned from active duty and it was love at first sight. They married soon after, on September 4, 1955, and spent 64 years together. Robert began a career in farming, with Phyllis as his faithful companion; she raised their four children, Bobbie, Robin, Phillip, and Patrick, while Robert worked long hours. Once chores and homework were done, Phyllis would help on the farm. Often, you could find Phyllis out on the tractor, making sure all of the farming duties were attended to. She was never afraid of work and even drove a school bus while the children were in school. During this time, the children were Phyllis’s priority. She attended all of their school and sporting events. She made sure that they were all held accountable for their responsibilities at home, including plenty of chores, and maintaining the ever-present garden. Phyllis ran a strict household, albeit with a calming and loving demeanor. She and Robert were a great team; Robert made sure the kids were up with the chickens and Phyllis waited up until they got home, many times late into the evening. Phyllis had an entrepreneurial spirit and a desire to get away from farming. She wanted to travel and in the early 80’s, Phyllis and Robert were able to sell the farm and began a new chapter that allowed Phyllis to put her creativity to work. After selling the farm, they started out in a converted Frito Lay van, the original tiny house. Phyllis and Robert spent many years in California and traveling the United States, running a bar and concession stand called Cable Car Goodies. She even worked a Grateful Dead concert! Phyllis finally found a niche in plastic engraving, and that became their livelihood for the next thirty years. Phyllis and Robert made custom name tags and other personalized items, selling them at tractor shows all over the country, and were able to visit every state in the United States, except Hawaii, Alaska, and Maine. They upgraded from their van to a Folsom Prison bus that Phyllis converted into an RV. Phyllis and Robert began spending winters in Donna about thirty years ago and continued their flourishing business at the Don-Wes Flea Market. The Winter Texans loved the customized plastic name tags, and their product has become a local necessity for RV Parks. Phyllis loved to read, dance, and was an avid Nebraska Huskers football fan. She was a talented pool player; some may even call her a “pool shark.” Phyllis was always very proud of her mathematical brain. She was very analytical and able to add up all the domino points in her head before anyone else could count. Phyllis was not a fan of cooking but when she did, her recipes were always made to perfection, especially her homemade bread. She had a great sense of humor and could light up a room. Phyllis was most proud of her grandchildren and their successful careers and lives. She was a woman of strong faith. Her famous phrase, “whatever,” was a testament to her faith in Christ and His plan, never wavering, even after losing a son. She was also a cancer survivor, beating both salivary and esophageal cancer. Phyllis is preceded in death by her parents, Milford and Verna Wehenkel, son, Patrick Montgomery, sister, Barbara Pellatz, and brother in law, Lorraine Montgomery. She is survived by her loving husband, best friend, and partner, Robert, children, Roberta “Bobbie” Kleinschmit (Joseph) of Yankton, SD, Dr. Robin Treptow (Dr. Craig) of Great Falls, MT, Phillip Montgomery (Charlotte) of Alamo, sister, Joyce Striker (Russell), sister in law, Beverly Tamminga, fourteen grandchildren, nineteen great-grandchildren, and numerous nieces and nephews. Visitation will be Wednesday, January 22, 3-8pm, McCaleb Funeral Home. A memorial service will be Thursday, 2pm, First Baptist Church in Weslaco. Contributions in Phyllis’s honor can be made to www.her-journey.org or www.cancer.org.

Donna- Phyllis Ann Montgomery, 82, went home to be with the Lord on Sunday, January 19, 2020, at Doctor&#8217;s Hospital in Edinburg. Phyllis was born at her grandma&#8217;s house in Orchard, Nebraska, to Milford and Verna Wehenkel. Phyllis... View Obituary & Service Information

The family of Phyllis A Montgomery created this Life Tributes page to make it easy to share your memories.

Donna- Phyllis Ann Montgomery, 82, went home to be with the Lord...

Send flowers to the Montgomery family.