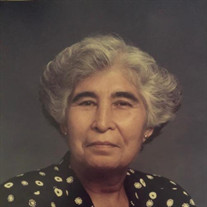 Weslaco- Pola Vasquez, 92, passed away on Tuesday, August 25, 2020, at her home in Weslaco, surrounded by family. Pola was born on January 08, 1928, to Isidro and Paula Rojas in Mexico City. She moved to Weslaco at the age of thirteen. Pola later got married and had five children. She was a wonderful role model for her children, grandchildren and great-grandchildren, teaching them the value of hard work and dedication. Pola worked at Knapp Medical Center in the housekeeping department for nearly thirty years, retiring at seventy-eight. When Pola wasn’t working at Knapp, she was busy taking care of her yard. She loved gardening and planting flowers. She also enjoyed travelling, particularly to Mexico to spend time with her family. She was a huge fan of Elvis Presley and his music, and was especially excited to share the same birthday with him. Her trip to Graceland was one of the highlights of her life. Pola was an excellent cook, famous for so many delicious meals. She was known for her rice and beans, chile rellenos and enchiladas, to name a few. Pola always had an inviting home, and everyone was welcome. She was an independent and hard working woman who raised five children on her own. She instilled good values and led with a firm, but fair hand. Pola’s children, grandchildren and great-grandchildren all respected and adored her. Pola is preceded in death by her parents, Isidro and Paula Rojas and daughter, Norma Rivera. She is survived by her children, Gloria Cruz of Corpus Christi, Laura Balli (Israel) of Weslaco, Sylvia Hernandez (Roy) of Edinburg, Armando Vasquez Jr. (Leticia) of Donna, and son-in-law, Alex Rivera of Weslaco, grandchildren, Marisa Mir (Gasper), Alex Jr. and Arnold Rivera, Claudia Jensen, Roy and Edward Ray Hernandez, Ronnie Cruz, Israel Jr. “Riley,” and Lorena Balli, Armando III, Victor, Orlando, and Priscilla Vasquez, great-grandchildren, Cain Anthony, Victor, Romel, and Victoria Vasquez, Jonas Cunningham, Nicolas Balli, Sadie, Kara, and Avery Jensen, Phoenix, Eddie Ray, and Judy Hernandez. Visitation will be Friday, August 28th, 10 am-9 pm, with a rosary at 7 pm at McCaleb Funeral Home. A funeral service will be Saturday 8 am, at McCaleb Funeral Home, followed by burial at Highland Memorial Park, with Father Francisco Solis proceeding. Serving as pallbearers will be Ronnie Cruz, Riley Balli, Armando Vasquez III, Alex Rivera Jr., Arnold Rivera, and Edward Hernandez.

Weslaco- Pola Vasquez, 92, passed away on Tuesday, August 25, 2020, at her home in Weslaco, surrounded by family. Pola was born on January 08, 1928, to Isidro and Paula Rojas in Mexico City. She moved to Weslaco at the age of thirteen. Pola... View Obituary & Service Information

The family of Pola Vasquez created this Life Tributes page to make it easy to share your memories.

Send flowers to the Vasquez family.