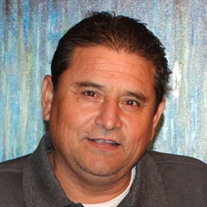 WESLACO: Raul Castillo Sr., 60, passed away on September 7, after a strong battle with lymphoma. On September 21, 1960, Raul was born in Mercedes, Texas, to Miguel and Emma Quiroga Castillo. Raul had eleven siblings and grew up in Mercedes. Shortly after graduating from Mercedes High School, his best friends introduced him to their cousin, Connie Zamarron, and they were an instant match. Raul and Connie were married on September 22, 1984, and Raul's best friends be-came his family for the rest of their lives. Raul worked as a carpenter, and he and Connie raised three children together, Raul Jr., Chris-tine, and Randy in a home that he built with his own two hands. Raul was a loving husband and an involved father and grandfather. Raul was a natural problem solver. As a young carpenter, he observed the plumbers and electricians and quickly became a man of all trades. His strong work ethic allowed him to become the proud owner of Raul Castillo Construction. He was an honest man, and his construction business thrived because of Raul's integrity and tenacity. Raul could fix just about anything. He was very generous and kind and was quick to offer his handy work to family, friends, and neighbors. Raul's hobbies included fishing, he sought the thrill of reeling in a large red drum. Aside from fishing, he enjoyed playing pool and poker nights with his lifelong friends. He and Connie would entertain themselves by dancing to Country and Tejano music and enjoyed sharing the evenings in their backyard. Raul will be remembered for his huge heart. He was a family man and a man of faith. Raul is preceded in death by his father, Miguel Castillo, siblings, Uvaldo Castillo, Roberto Castillo, Julian Castillo, Lydia Garcia and Corina Figueroa. He is survived by his loving wife, Connie Castillo, his mom, Emma Castillo, children, Raul Castillo Jr. (Sonia Linda), Christine McCleary (Kenneth), and Randy Castillo, grandchildren, Ayden and Kaylee Castillo, Nyla and Natalie McCleary, siblings, Oralia Castillo, Jose Castillo, Emma Chrisman, Margarita Rincon, Miguel Castillo Jr., and Omar Castillo, and numerous nieces and nephews. Visitation will be Sunday, September 12th, 1-9 pm, with a rosary at 6 pm. Mass will be celebrated on Monday, September 13th, at 10 am at St. Pius X Catholic Church in Weslaco, followed by burial at Mercedes Memorial Restlawn. The pallbearers will be Raul Castillo Jr., Randy Castillo, Kenneth McCleary, David Castañeda Sr., Gabriel Castañeda, Alfredo Castañeda Jr., and honorary pallbearer will be Ayden Castillo (grandson).

WESLACO: Raul Castillo Sr., 60, passed away on September 7, after a strong battle with lymphoma. On September 21, 1960, Raul was born in Mercedes, Texas, to Miguel and Emma Quiroga Castillo. Raul had eleven siblings and grew up in Mercedes.... View Obituary & Service Information

The family of Raul Castillo Sr. created this Life Tributes page to make it easy to share your memories.

Send flowers to the Castillo family.