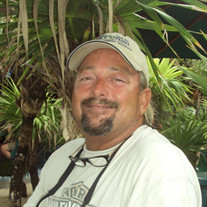 Laguna Madre-Raymond "Skipper" H. Mock, 61, passed away Friday, July 30th, at Valley Baptist Medical Center in Brownsville due to complications from the vibrio bacteria. Skipper was born on February 15th, 1960, to Victor Hugo Mock and Mary Lee Goolsby in Brownsville, Texas. Skipper, the youngest of four, grew up in Port Isabel and spent his entire life on the water around South Padre Island. Skipper learned the lifelong sport of fishing from his grandfather Jody Goolsby. In his youth, he was an avid surfer. Skipper graduated from Port Isabel High School in 1978. He tried football and band during high school but never enjoyed either enough to give up his evenings and weekends surfing or fishing. Shortly after graduating from high school, Skipper founded Catch the Fish Charter Service in 1982. His passion for finding the perfect fishing spot became a full-time career, and Skipper loved every minute of it. He became a well-known fishing legend and icon and spent the next forty years building his business, winning tournaments, and making lifelong friendships along the way. Skipper married Karen Pfeiffer in 1981, and they had two children, Victoria and Corey. He brought them up on the water, teaching them the same tricks and lessons of being a great fisherman. As a result, they fished and won awards in many tournaments on South Padre Island. Skipper often bragged about their accomplishments. Victoria was the youngest Lady Kingfish Tournament champion of her time, and was the hostess for the 2007 Texas International Fishing Tournament. Corey won a scholarship in the 1999 CCA Star Tournament and has followed in his dad's footsteps not only in his passion for the sport of fishing but becoming a full-time captain. Skipper met Karen Watt in 2005, and they were a perfect match. Both Skipper and Karen loved being outdoors and on the water, and they were both adventure seekers. Everywhere there was surf and sand, the couple visited. Many of these vacations involved competitions for Karen and some of her friends, but Skipper was the ever-faithful support team. They visited Hawaii a few times, St. Croix, St. Thomas, St. John, Cancun, Cozumel, Costa Rica, Panama, to name a few. But, by far, the couple's craziest or most challenging venture was when Karen's 50th birthday wish was a challenge that could be unmatched; to travel to Key West from South Padre Island via Waverunners. Skipper, who rarely backed down from a challenge, quickly engineered some aluminum racks to carry supplies, and they loaded up their tackle and luggage on two Yamaha waverunners and set sail on an adventure of a lifetime. Local journalists chronicled the trip, and despite a few run-ins with sharks, alligators, game wardens, and weather elements, they made the 1800 mile trek relatively safely without much need for a GPS. Captain Skipper Mock knew the Gulf Coast like no other. Skipper also loved his Harley Davidson and the freedom and excitement that can only come from riding in the open air. Skipper was a great cook and enjoyed the gathering with friends and family that would accompany a great Sunday afternoon or evening meal. Skipper was a friend to all who knew him and was loved by so many. His free-spirited, laid back, and fun-loving personality will be cherished by all who knew him. His legacy will live on forever at South Padre Island, Texas. RIP Captain Skipper Mock. Shaka shaka. Skipper is preceded in death by his parents, Victor Hugo Mock and Mary Dennis, and brother, Joseph “Smokey" Mock, and Duke (Skipper's German Shorthaired Pointer). He is survived by his companion, best friend, and life partner, Karen Watt; daughter, Victoria Pollock, and husband Jason of Des Moines, Iowa; son, Corey Mock of Laguna Vista; brother, Victor "Sammy" Mock and wife Julie of Port Isabel; sister, Rhodie Rawls and her husband, Don, of Blum, Texas; numerous nieces and nephews, and his beloved parrot “Vato” Mock. We invite you to celebrate Skipper's life on Sunday, August 8th, 2021, at Parrot Eyes Restaurant & Bar, his fishing home, at 5801 Padre Blvd, South Padre Island, TX 78597, from 3-6 pm. The memorial service will begin at 4:30 pm presided by Captain Paul Munarriz Sr. and followed by sharing of stories. If you have a story to share, we would love to hear it and we will open the mic up to friends. Service will be livestreamed fb://event/?id=561228234916597 In lieu of flowers please make contributions to Lower Laguna Madre C.C.A. Chapter https://ccatexas.org/find-your-chapter/lower-laguna-madre/, Friends of the RGV Reef https://rgvreef.org/, Fishings Future https://fishingsfuture.org/ or Coastal Charity if your choice.

The family of Raymond "Skipper" H. Mock created this Life Tributes page to make it easy to share your memories.