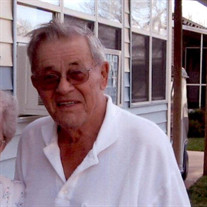 Richard Eugene Poulter, 91, of La Feria, TX, peacefully passed away on August 7, 2021, after a battle with COPD and Heart disease. He died of “oldness”. Richard was the third and last child, born at home, on April 13, 1930, to Alfred Poulter and Minnie Hagen Poulter in Section 10 of Cumberland, WI. Richard graduated from Section 10 School in 1948. Richard married Joyce Annette Trebesh daughter of Sylvester (Barney) and Leona Ebert Trebesh of Cumberland Wi. November 12, 1955. They first saw each other at the Tower House restaurant in Cumberland Wisconsin. Richard and Joyce went on to have three children, Larry David Poulter, Terry Richard Poulter, and Amy Lynn Poulter. Richard joined the United States Air Force, where he served for 20 years and retired as Master Sergeant on June 1, 1971. He went on to pursue another career working at 3M, in Cumberland Wi., retiring after 25-years in Austin Texas, while living in Round Rock and then Jarrell Texas. After Richard’s retirement, they sold out and pursued his love of travel with his wife Joyce. They toured the country in a 5th wheel. They would travel when the wind was right and eventually settled in La Feria Texas, where he made many friends and enjoyed the Winter Texans, often heading to NW Wisconsin to visit family and friends in the Summer. Richard was preceded in death by wife Joyce Poulter; Brother Laurence Poulter, son Larry David Poulter; father Alfred Poulter; mother Minnie Hagen Poulter. He is survived by a brother, George Poulter, daughter Amy Poulter; son Terry (Arlene) Poulter; grandsons Joshua (DiAnna) Poulter, Matthew Poulter, Seth Poulter, and David Fogle, his darling granddaughters Sarah Conner and Emily (Kegan) Fairchild, his great-grandchildren Lilie Mae Fogle, Carter Richard Poulter, Elijah James Poulter, and Jade Steines with numerous or nieces and nephews. He will be laid to rest next to his only wife, Joyce Poulter, at Fort Sam Houston Military Cemetery in San Antonio Texas

The family of Richard Eugene Poulter created this Life Tributes page to make it easy to share your memories.

Send flowers to the Poulter family.