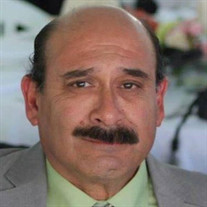 Roberto Isabel Infante, 60, of Weslaco, passed away Monday, November 16, 2020 at Knapp Medical Center. Roberto Isabel Infante was born to Elvira and Isabel Infante on January 11, 1960. He graduated from Donna High School in 1979, where he ran track and field, and played baseball and football for the Donna High School Redskins. Classmates often described Robert as being a “beast on the field,” setting a standard for many athletes he trained and competed with. Robert was an avid sports fan; his favorite teams were the Dallas Cowboys, the Houston Rockets, and the Houston Astros. Robert also loved listening to classic rock and classic country, and enjoyed spending time with his children, grandchildren, and his dogs. He married Velma Infante (de Leon) on June 12, 2003 in Hidalgo County. He worked as a newspaper carrier for the Monitor and the Mid Valley Town Crier for over twenty years, serving the local community and Winter Texans alike. He is preceded in death by his father Isabel Infante and his aunt Higina “Ina” Infante. He is survived by his wife Velma Infante (de Leon); his children, Deborah Infante Rutigliano (Lou), Daniel Infante, Dorian Infante, Ashley Rodriguez, Amanda Rodriguez, Andrew Infante, Irene Infante, and Gabriel Infante; his siblings, Efrain Infante, Eloy Infante (Teresa), Ernesto Infante (Blanca), and Iris Escanuela; his mother Elvira Infante; his grandchildren Simon Jude Aguilar and Kensley Olivia Scott; and numerous nieces and nephews whom he loved. Visitation will be held on Friday, November 20, 2020, from 4:00pm to 9:00pm with a rosary at 7:00pm at McCaleb Funeral Home. The family will be receiving friends and family on Saturday, November 21, 2020 from 10:00am to 9:00pm at McCaleb Funeral Home in Weslaco.

The family of Roberto Infante created this Life Tributes page to make it easy to share your memories.

Send flowers to the Infante family.