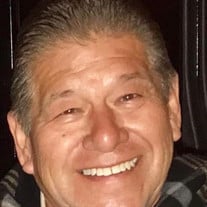 Robert A. Rodriguez, 65, was called to be with the Lord on January 16, 2021. He was born on December 17, 1955, in Weslaco, TX to Local Pioneers Tomas Rodriguez Sr. and Guadalupe Garcia Rodriguez. Robert was the youngest son of nine siblings,... View Obituary & Service Information

The family of Roberto Armando Rodriguez created this Life Tributes page to make it easy to share your memories.

Robert A. Rodriguez, 65, was called to be with the Lord on January...