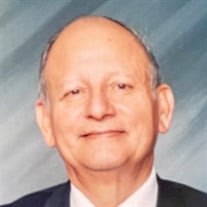 Rodrigo “Rudy/Rod/JR” Reyna passed away peacefully on January 21, 2021, at the age of 81, at home surrounded by his loving family. Rodrigo lived a full life as a wonderful son, brother, husband, father, grandfather, father-in-law, and man. He will be dearly missed and forever cherished in our hearts. Rodrigo was born to Albino and Clotilda Reyna on December 11, 1939 and was one of seven children. After graduating Mercedes High School with honors in May 1959, he married the love of his life, Mary Eloisa Garza, on August 15, 1963. He had four children and enjoyed fishing, hunting, going to the beach, vacations with family. He helped coach his sons baseball leagues and served as an assistant scoutmaster for Boy Scout Troop 100 for his three Eagle Scout sons at St. Pius X Catholic Church and later as a district commissioner of the Rio Grande Boy Scout Council. He supported his daughter by attending her choir and various school activities. He was a man of faith and served as a lector and choir member at St. Pius X Catholic Church and member of the St. Pius church finance committee. He originally was a parishioner of Our Lady of Mercy Catholic Church in Mercedes, Texas, attended Catholic school there and served as an altar server. A first-generation university graduate, Rodrigo began his studies at Pan American University in Edinburg and transferred to the University of Texas at Austin, where he completed his Bachelor’s degree in May 1964. He later obtained a Master’s degree from Pan American University in December 1985, including taking school administration courses from Texas A&M University. Rodrigo shared his passion for government and history with thousands of high school, middle school and college level technical school students over the years as a teacher for Weslaco ISD, Donna ISD; plus, as a Texas State Technical Institute acting director, Valley View ISD assistant principal, and school curriculum consultant. An entrepreneur from a very young age (e.g., paper boy, shoe shiner, A&R Scooter Shop) in his younger days he explored and had success with other ventures such as World Book and life insurance to earn money for college and again in retirement with his own business, Rod Reyna Enterprises. In addition to his love of teaching and learning, Rodrigo enjoyed sports and outdoors. He served as a referee official for high school football and basketball for more than 40 years. He was an avid aviator and had a pilot’s license for many years flying small planes and owning his own flying instruction business, including many years as an early member with the Commemorative Air Force, and Weslaco Airport Board as chairman. Rodrigo participated in a wide variety of service activities, until no longer able, such as the Lion’s Club, Jaycees Club, Knights of Columbus 4th Degree, Valley Alliance of Mentors for Opportunities and Scholarships (VAMOS), Valley International Trade Alliance, Rio Grande Valley Livestock Show International Relations, Weslaco Chamber of Commerce Redcoats, McAllen Hispanic Chamber of Commerce International Trade, Mid Valley School Personnel and Teachers Association, and chairman of the Development Council for the Benedictine Monastery of the Good Shepherd in Rio Grande City, Texas. He was in the U.S. Army Reserve, Texas National Guard, and Civil Air Patrol. He served at Fort Polk, Camp Mabry, and Donna National Guard. He is survived by his spouse, Mary; his children and their spouses, Deacon Rodrigo Eduardo and Cynthia Reyna; Steve and Maria Elena (who preceded him in death); David and Tania Reyna; Denise and Roel Barrientes; grandchildren, Alyssa Reyna Conn, Julia Reyna Montes, Miranda Reyna; Steven, Victoria, Elena, Raquel, and Nicholas Reyna; Ethan and Dylan Reyna; and Eli Barrientes and step-grandchildren, Alexandra Barrientes and Anthony Barrientes; plus great-grandchild, Isaac Conn and step-great grandchild, Lylah Trevino. He was preceded in death by his siblings Guillermo (“Billy”), Armando, Patricia, Jaime, and Albino. His youngest brother Robert survives him. All of these he loved and touched deeply. Family and friends may pay their respects during visitation on Wednesday, January 27, 2021 from 1-9pm at the McCaleb Funeral Home, 900 West 4th Street, Weslaco, Texas. Family and friends are also invited to Vigil and Rosary at the McCaleb Funeral Home on Wednesday, January 27, 2021 at 3pm. The Funeral Mass will be held St. Pius Catholic Church, 600 S. Oklahoma Avenue, Weslaco, Texas 78596 on Thursday, January 28, 2021 at 10am. Interment will follow at Sacred Park Cemetery, 12506 North Mile 2 West Road, Mercedes, Texas 78570. In lieu of flowers, donations in his name may be made to Benedictine Monastery of the Good Shepherd, Attn: Sister Nancy Boushey, 705 Monastery Ln, Rio Grande City, TX 78582. Livestream will be available on https://www.youtube.com/watch?v=bDyyQNzayO

The family of Rodrigo Reyna created this Life Tributes page to make it easy to share your memories.

Send flowers to the Reyna family.