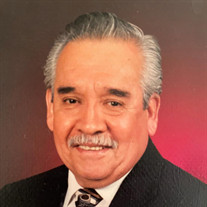 Weslaco: Rogelio L. Cantu Sr., 86, passed away at his home on Saturday, March 27th, 2021. Rogelio was born on June 26th, 1934 to Tito Cantu Montemayor and Maria del Carmen Loera de Cantu in Monterrey, Mexico. As a young man, he met Carmen, and courted her for eight years before marrying her on her birthday, July 17th, 1960. Rogelio remained a loving, loyal and faithful husband for 58 years, until her passing in 2018. While living in Weslaco, Rogelio vowed to be a great husband and father. While Carmen was the manager of the home and family with their three children, Rogelio worked his way up the ladder at Sherry-Barbee, later becoming Barbee-Neuhaus Implement Company. Rogelio eventually moved to sales and worked for the company for over forty years, until his retirement. Ever the entrepreneur, Rogelio and Carmen also ran a local restaurant for many years, "El Taquito Cafe," where Carmen cooked and managed the business, while Rogelio kept up with the bookkeeping. Rogelio wanted to provide the American dream for his family, which was an apparent success. His family meant the world to him, but he cared for Carmen like the bride he brought home on his wedding day. Rogelio's love and affection for his wife was a characteristic that was hard to miss, and Carmen, “La Nena,” was the queen of Rogelio's life. When they were younger, Rogelio looked forward to a night out on the town which always included dancing with his bride, or an evening stroll and window shopping through the downtown shops of Weslaco, with the entire family. He took the role of “father”, ever so seriously. Always the pillar of strength, discipline, and more-so of support, Rogelio’s presence and attention to detail was second to none. His focus and joy were keeping his wife, children, and grandchildren happy. Family gatherings, whatever they might be, were his greatest joy, never missing a birthday dinner, award ceremony, pageant, baseball game, graduation, basketball game, or religious sacrament. He was an undoubtedly an active and supportive father and grandfather. Rogelio was one of a kind. He loved to play games and turned many a birthday party into a scavenger hunt for the "gift from grandpa." Rogelio was also quite the photographer and enjoyed capturing as many special family moments as he could. Rogelio enjoyed sports, including boxing, baseball, and bullfighting, to name a few of his favorites. He and Carmen loved to travel, and the family made lots of memories taking road trips in their station wagon. They traveled all over the US and Mexico. Their travels led them to Acapulco numerous times and traveling through several of the US States. Carmen and Rogelio continued to travel together, taking cruises. They enjoyed Hawaii, Florida, Colorado, to name a few favorites. Rogelio also spent time with the "guys," taking some road trips to watch the Houston Astros. Rogelio was not only a devout Catholic, but a loyal husband, father, friend, and his work ethic was unparalleled. Rogelio was a stern, yet loving father. The greatest gift to his children and grandchildren is leaving them a legacy of loyalty, support, discipline, attention to detail, and greatest of all, family love and unity. Rogelio is preceded in death by his parents, Tito and Maria del Carmen Cantu, his loving wife, Carmen, and son-in-law, Efrain Aviles. He is survived by his children, Anabell Cardona, Rogelio Cantu, Jr. (Nina), and Mari Aviles, all of Weslaco. The gems of his life, his grandchildren, Roy Cantu, Gabriel Cardona, Krista Cantu, Andrew Cantu, Gabriella Aviles, Dante Cardona, Michael Aviles, and Christian Aviles, and great-granddaughter, Everly Cantu.

The family of Rogelio L. Cantu created this Life Tributes page to make it easy to share your memories.

Send flowers to the Cantu family.