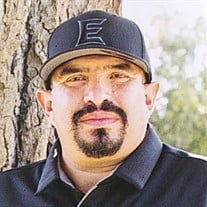 Weslaco-Roman “Bubba” Gutierrez III, 44, passed away suddenly on Saturday, May 01, at McAllen Medical Center. On January 06, 1977, Roman was born to Roman Gutierrez Jr. and Dee Dee Rodriguez in Dallas, Texas. Roman grew up in Dallas, where he graduated from Skyline Highschool in 1994. At an early age, Roman helped his dad coach soccer. Roman stayed single for a long time. When he was introduced to Irene Cavazos in 2001, he knew she was “the one.” They were married on November 09, 2002. Roman was a romantic guy and loved to remind Irene how special she was and that she was his soulmate. Roman and Irene had one son, Roman Joshua Gutierrez, and he was their pride and joy. Roman and Irene came to the valley for Spring Break so that Roman Joshua could spend time with his grandparents. When Roman and Irene were driving back to Dallas, he asked Irene how she would feel about moving to Weslaco. She thought he was kidding. Roman fell in love with the valley and the slower pace. He thought it would be a great place to raise their son, so they made Weslaco their permanent home. Roman volunteered at every opportunity. He was an active member of the Weslaco East Football Booster Club and was a board member of the Weslaco Youth Football League. One of Roman’s hobbies was to customize football helmets. He did this for “little Bubba’s” football teams and many of their friends. Roman was a mechanic by trade, but he loved cars. He was active in the local car club, the Midnight Kustoms car club, and loved detailing and fixing cars and trucks. Roman was a huge Oakland Raiders football fan and never missed a game. He also loved to watch documentaries on his favorite team and historical events, like the Titanic. Roman loved a good barbecue with friends. He was a caring guy and always put others before himself. Roman was happy when everyone else was happy, a truly genuine man. Roman is survived by his wife, Irene Gutierrez, son, Roman Joshua Gutierrez, mom, Dee Dee Norman of Mt. Vernon, dad, Roman Gutierrez Jr. (Rita Paredes) of Dallas, and brother, Louis Gutierrez (the handsome one with brains) of Dallas. Visitation will be Friday, May 7th, 10 am-9 pm, with a rosary at 4 pm, a blessing/celebration of life, with Father Francisco Solis officiating, 6 pm followed by sharing stories at McCaleb Funeral Home.

The family of Roman Gutierrez III created this Life Tributes page to make it easy to share your memories.

Send flowers to the Gutierrez family.