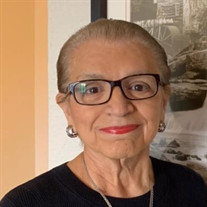 Weslaco- San Juanita “Janie” Reyna Campos, 70, passed away after battling pancreatic cancer on Tuesday, September 22, 2020, at DHR in Edinburg. Janie was born on August 25, 1950, to Ezequiel Reyna Sr. and Angelita Cerda Reyna. Janie grew up in Weslaco, where she graduated from high school and met her future husband, Roberto Campos. After high school, Janie attended Texas Woman’s University, and Roberto joined the US Airforce and began a career in the military. Roberto and Janie were married in 1972. Janie graduated from TWU and started a career in education. She taught throughout Roberto’s military career and supported Roberto as he worked his way up to Master Sergeant. After Roberto’s retirement, the couple settled back into Weslaco and continued raising their four sons, Jason, Joshua, Jarrad, and Justin. Janie had a tenacious personality. After taking a back seat to Roberto’s career and being a mom, she went back to school and earned her Master’s degree from Pan American University; and later, a Juris Doctorate from St. Mary’s University. Janie became an attorney and practiced law for the next thirty-three years. Twenty-three of these years, she was an esteemed attorney at her brother’s firm, The Office of Ezequiel Reyna. Janie always felt compelled to serve others, so after much thought and prayer, she decided to leave her lucrative career and help others as an immigration attorney. The Law Office of San Juanita R. Campos is where Janie spent the last ten years of her career, serving others, her true calling indeed. Janie was an avid reader, a leader in her community, and an advocate for good change. She loved her career, and working became a hobby. Janie was always willing to serve others and consistently generous. The family was essential to Janie. Her brothers and sisters remained close, and the family traditions that started early in life morphed into a lifelong friendship amongst siblings and their respective families. These traditions began with Sunday dinners and Sunday breakfasts at Janie’s mom’s house with all siblings and grandchildren. Thanksgiving included the turkey bowl and ended with a gathering of at least sixty family members. Easter and Christmas were very similar. The Reyna siblings traveled together yearly all over the country. The laughter and precious times spent together are priceless. Above all, Janie was a devout Catholic and servant of Christ. She was a faithful member of St. Joan of Arc, where it all began in Elementary school. Janie is preceded in death by her parents, Ezequiel Sr. and Angelita Reyna, son, Robert Jason Campos, Emma Reyna Fuentes, and Soyla R. Gonzalez. She is survived by her loving husband of nearly fifty years, Roberto Campos, sons, Joshua Ezequiel Campos (Catherine) of Chapel Hill, North Carolina, Jarrad Blas Campos of San Antonio, and Justin Rene Campos of Weslaco, daughter in law, Angela Campos, Ezequiel Reyna Jr. and his wife, Livia, Daniel Reyna and his wife Thelma, sisters, Antonia Reyna Fuentes and her husband Joe, Maria Elena Reyna, Cynthia Reyna Valencia and her husband Ernesto, all of Weslaco, grandchildren, Robert Nathaniel, Joshua Jason, Robert Austin, David Ezequiel, Kennedy Rosser, and Aubree Marie Campos. Visitation will be Thursday, September 24th, 4-9 pm, with a Holy Rosary at 6:30 pm. Mass and burial will be private.

The family of San Juanita Campos "Janie" created this Life Tributes page to make it easy to share your memories.

Send flowers to the Campos family.