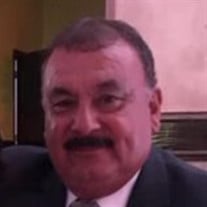 Sergio Humberto Aparicio, 66, passed away on Saturday, July 25th, 2020 at Knapp Medical Center in Weslaco, Texas. He was born on December 26, 1953 to Vicente Aparicio Moreno and Gregoria Lerma Flores in Gomez Palacios, Durango, Mexico. He met his wife Graciela Degollado at an event in Reynosa, Tamaulipas Mexico when they were both young adults. They were married in 1975 and raised their three children in Weslaco. Sergio opened Step Right Company with his brother Lazaro in 1978, an ornamental iron & welding company. They both built this company into the thriving business for thirty-six years and later took over the business on his own. Sergio was work-driven and had strong work ethics. He was a true craftsman, and over the years, he sat among engineers and architects to manufacture precast concrete products and industrial or ornate steel in San Juan Texas. Sergio was able to train his employees' invaluable skills of craftsmanship and tricks of the trade throughout the last 42 years. He was a real expert in his field and a genius at engineering the demand of the construction industry with a only high school education. If someone could dream it up, Sergio would engineer it to perfection. Sergio was an avid hunter in his younger years. As he became older, he traded hunting for fishing, which he had enjoyed most of his life. He loved to entertain his children, relatives, and friends with an all-day fishing excursion. Sergio was a devoted husband, and he and Graciela enjoyed dancing and socializing at many family events. Sergio was always dressed impeccably for any occasion. He loved listening to music from disco to Dic Van Dyke Oldies, Danzones, Salsa Tropical, and Mariachis and on and on. He knew a lot about music artists, and he liked to sing along, but not as much as he loved to dance with his beautiful bride. Sergio loved to barbecue and made the best barbecue chicken hands down. He enjoyed playing racquetball and watching television. His true passion was watching his grandchildren play sports. The grandchildren were all on traveling teams, and Sergio and Graciela went great distances to watch them compete. He collected their trophies and was so proud of all his grandchildren's accomplishments. Sergio was a man of faith, and his Catholic religion was at the center of his life. He and Graciela attended St. Pius X Catholic Church in Weslaco for the past forty-five years. Sergio served as Eucharistic minister and was a member of the ACTS community locally and in Mexico. Sergio will always be remembered for his kind, loving, and compassionate personality. He followed through with his commitments and was a supportive husband, father, grandfather, and supervisor. He was generous and always willing to help someone in need. Sergio was a diligent worker, spontaneous, fun, and a great athlete as he played racquetball during the last 30 years. Sergio is preceded in death by his mother, Gregoria Lerma Flores, step-father, Gilberto Flores, and father, Vicente Aparicio Moreno. He is survived by his wife and soulmate, Graciela, children, Sergio H. Aparicio Jr. (Monica) of Edinburg, Estivalitz Aparicio of San Antonio, Miguel Aparicio of Tarzana, California, grandchildren, Sergio Alejandro, Diego Humberto, Gabriella Lizet, Carolina Rose Aparicio, Alessandra Monet Williams, siblings, Juanita Roomsberg (Robert) of San Antonio, Lazaro Aparicio (Idolina) of Pharr, Guadalupe Contreras (Juan) of Donna, Teresa Lucio (Roy†) of Pharr, Vicente Aparicio (Teresa) of Donna, Alejandro Flores (Alma Veronica) of Alamo, Gilberto Flores Jr. (Marisol) of Pharr, and Hugo Flores (Judy) of San Juan. Visitation will be Sunday, August 2nd, from 1-9:00 pm with a rosary at 7:00 pm. Graveside service will be Monday, August 3rd, 10am, Sacred Park Cemetery in Mercedes.

The family of Sergio H. Aparicio created this Life Tributes page to make it easy to share your memories.

Send flowers to the Aparicio family.