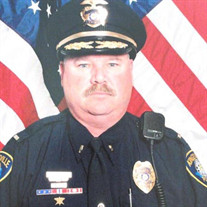 Sr. Patrolman Sherman Otto Benys, Jr., lost his life tragically and senselessly while serving his community at the age of 58 on November 4th, 2021. On January 18, 1963, Sherman was born to Sherman and Joan Franks Benys in Corpus Christi, their firstborn son. He grew up in Calallen with his younger sisters Claire and Michelle. During high school, Sherman played football but found his passion in F.F.A. Sherman thrived in F.F.A. and won numerous awards, including a state championship. After graduating from Calallen Highschool, Sherman attended Texas A&I University, where he studied Ag Economics and was a proud brother of the Sigma Chi Fraternity. Sherman earned a culinary arts degree from Del Mar College in 1986 and began a career in the restaurant business. First, Sherman worked as a chef at an upscale restaurant in Corpus and later Dallas. Although the experience was priceless, Sherman decided that the restaurant industry was not where he wanted to spend his career, so he moved back to Kingsville and went to work at the farm division on the King Ranch. During this time, he met up with his high school prom date, Vicki Brand, and they have been inseparable ever since. Sherman and Vicki were married on May 30, 1992, and they were a great team. Sherman decided to dedicate his life to the community when he went to work as a Police Officer for Kingsville in 1996. Sherman also went back to college, earning a Bachelor’s degree from Texas A&M University-Kingsville in 2000, and he was very proud of his alumni. Sherman and Vicki raised three children together. Sherman’s family was indeed his pride and joy, and his grandchildren sent him over the moon. Although he spent a lot of time at work, saving countless lives, Sherman made family time that much more special. The family spent weekends at the deer lease, labor day with their Weslaco family hunting birds, had a yearly family trip to Concan, and pulled an all-nighter together for their annual cooking of all the deer meat for the year and the Benys famous sausage. These were just a few of the traditions that Sherman prioritized, but they created priceless memories. Monday, November 1, 2021, Sherman saved a few more lives. However, many people may not know, but Sherman took that domestic violence call on his way into work. That was “typical” Sherman, always early, and the answer was always yes. He was selfless, not only in his chosen career as a Police Officer but in all facets of his life on Earth. Sherman was a true friend to all who knew him and the first on-site during a time of need. He was an outdoorsman and lover of nature. Sherman was an avid fisherman, hunter, and volunteer coach who lit up any room, backyard, boat, or deer blind with his witty personality and genuine smile. In addition, Sherman was always up for a friendly round of golf; he could outcook many local chefs and was the life of the party. Sherman was a loving husband, father, grandfather, son, brother, cousin, fellow officer, and friend who we will never forget. He was preceded in death by his father, Sherman Otto Benys, Sr. Among those left to cherish his memory are his loving wife and best friend, Vicki Benys, children Breanne (Jordon) Polhemus, Bailey Marie Benys, and Benjamin Augustus Benys, mother, Joan Benys, sisters Claire Benys Gendron and Michelle (Keith) Benys Krenek, grandchildren, Ethan, Easton, Emarie, and Everlie Polhemus, and numerous nieces, nephews, extended family, fellow officers, and friends. A visitation will be held on Monday, November 8, 2021, at St. Gertrude the Great Catholic Church, from 10:00 AM to 9:00 PM; with a holy rosary to be recited at 6:30 PM. A mass of Christian burial will be celebrated at 11:00 AM on Tuesday, November 9, 2021, at St. Gertrude the Great Catholic Church. Rite of Committal and Interment with full Police Honors will follow at Chamberlain Cemetery. “Blessed are the peacemakers for they will be called the children of God” Matthew 5:9 The Benys family would like to establish a “100 Club” in the Kingsville area for those wanting to make contributions. This organization supports police officers and their families by providing resources like counseling services that are desperately needed. Any donations can be made to Vicki Benys and mailed to P.O. Box 5431 Kingsville, TX 78364. Please include Sherman Benys in the memo.

Sr. Patrolman Sherman Otto Benys, Jr., lost his life tragically and senselessly while serving his community at the age of 58 on November 4th, 2021. On January 18, 1963, Sherman was born to Sherman and Joan Franks Benys in Corpus Christi, their... View Obituary & Service Information

The family of Sherman Otto Benys Jr. created this Life Tributes page to make it easy to share your memories.

Send flowers to the Benys family.