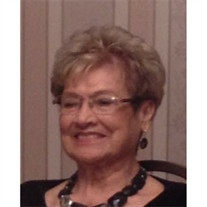 Weslaco- Weslaco- Socorro Barker, 92, passed away on Saturday, June 3rd, 2017. She was born on November 29th, 1924 to Eusebio and Juanita Gonzalez in Los Aldamas, Nuevo Leon, Mexico. She grew up in Weslaco along with her eight siblings where she attended school. As a young teenager, she married her sweetheart, Graciano Garza, at the age of fifteen. Socorro had a very interesting life and faced a lot of obstacles along the way. She and Graciano would have three children together, Graciela, Viola, and Olga. Unfortunately, Graciano had an untimely death at the young age of twenty seven, leaving Socorro a widow. She had not had to work much, as she was a homemaker, but Socorro quickly entered the workforce to support her children. Socorro had a natural sense of style so she fit right in at Levine's Man's shop and Well's of Weslaco, where many will remember her. She began her retail sales career at Levine's, but worked at Well's for over sixty years, where not only was she a naturally gifted stylist, but a natural sales person. She had a tremendous work ethic and worked six days a week most of her life. She volunteered at Knapp Medical Center for a number of years. Socorro did re-marry Elisandro Munguia and had two more daughters, Josefina and Cynthia. After their divorce, Socorro would continue to work hard to raise her girls, working six days a week, but making sure that they attended mass on Sundays. Eventually, Socorro did marry her soulmate, James E Tribble and they enjoyed twenty five years of marriage. He helped raise the younger children and they had a wonderful life together. Jim opened a whole new world for Socorro, who had spent her whole life trying to support her children. Although, she would never give up her career at Well's, she was able to take some time off to travel the world and explore areas that she may not have done on her own. They went all over the United States, including Alaska, Las Vegas, and California, to name a few. They also spent some time in Panama. Jim taught Socorro how to drive a car, which she had never done. The most important thing by far, was that they danced. They danced everywhere and anywhere. That was Socorro's passion and Jim was a perfect match. Many will remember them from Arturo's where they danced the night away. Socorro was a great cook and the kids have fond memories of her traditional Mexican food, but that all changed when she married Jim. He was an excellent cook and he spoiled Socorro, which by this time in her life, was obviously, well deserved. Socorro also loved to play dominos and she even painted angels for a while, but mostly, she loved to work and dance. Unfortunately, Jim passed away in 1999 and once again, Socorro was a widow. She did eventually re-marry David Barker. Socorro had an interesting life, but through all of her obstacles, trials and tribulations, she kept her faith, and God rewarded her for that. She is preceded in death by her parents. Eusebio and Juanita Gonzalez, her brothers, Federico, Domingo, Heriberto, and Pablo Gonzalez, her sisters, Consuelo and Teresa Pena, her husbands, Graciano Garza, James E. Tribble, and David Barker, and her grandson, Joel Sauceda. Socorro is survived by her children, Graciela Vasquez (Juan) of Mercedes, Viola Sauceda (Joe) of Austin, Olga Alton (Frank) of Albequerque, NM, Josefina Rodriguez (Reynaldo) of Houston, and Cynthia Teague (Jud), of Garden Grove, CA., her grandchildren, David R Vasquez (Nicole), Nelda I Bulthuis (Doug), Melissa Sauceda, Audra DeBourge (Dean), Heather Taylor (Blake), Cristobal Rodriguez (Rebekah), Fernando Rodriguez, Erin Donnelly, and Cori Teague, sisters, Ernestina Cirilo and Alicia Buzbee, fifteen great grandchildren and numerous nephews and nieces. Visitation will be held on Tuesday, from 2-9pm, with a rosary at 7pm. Mass will be held on Wednesday, at 10am, at St. Pius Catholic Church in Weslaco. Serving as pallbearers will be Juan B. Vasquez, Joe Sauceda, Frank Alton, David R Vasquez, Doug Bulthuis, and Cristobal Rodriguez. Socorro will always be remembered by her strong work ethic, love of style and fashion, love of dancing and her faith in Christ.

Weslaco- Weslaco- Socorro Barker, 92, passed away on Saturday, June 3rd, 2017. She was born on November 29th, 1924 to Eusebio and Juanita Gonzalez in Los Aldamas, Nuevo Leon, Mexico. She grew up in Weslaco along with her eight siblings where... View Obituary & Service Information

The family of Socorro G Barker created this Life Tributes page to make it easy to share your memories.

Send flowers to the Barker family.