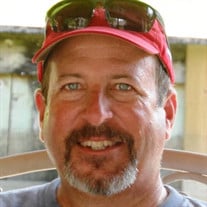 Theodore “Ted” Phillip Ellis, 55, earned his wings and reunited with his beloved grandson, Joaquin, on Saturday, October 12, 2019, after a courageous two year battle with cancer. Ted was born May 21, 1964, to Will “Bill” Paxton Ellis, Jr. and Patricia Green Ellis in Austin, Texas. He was their firstborn child, the first grandchild on both sides of the family, and big brother to Kathy and Keith. Growing up in Mission, Texas, Ted was active in Boy Scout Troop 84, where his Dad was the scoutmaster. Ted earned the Eagle Scout Award, a coveted rank held by fewer than four percent of Scouts. In addition to scouting, he excelled in sports. He played football and golf and earned a spot on the Southwestern University Golf Team. Growing up in Mission, just steps from the Mission municipal golf course, it was easy to grab his sticks and head out the back door, even at a young age. He enjoyed teaching kids to play golf, playing in tournaments, and organizing tournaments for charity. Ted met his high school sweetheart and soulmate in 1982, during his senior year. Rosemarie Sanfilippo, the beautiful, Edinburg Bobcat cheerleader, was the perfect match and future bride for the handsome Mission Eagle football player. While in college at Southwestern University in Georgetown, Ted pledged Phi Delta Theta and earned his B.A. degree in Business Administration. Ted courted Rosemarie long-distance as she attended Sam Houston State University in Huntsville. He made that trip to visit her so often that he admitted to using the SHSU library more than the SU library, to help earn his degree! Their married life began at First United Methodist Church in Mission, Texas on August 8, 1987. Ted was always affectionately referred to as “Tio” by his closest friends and fraternity brothers - a nickname given to him when little brother Keith could not pronounce “Theo.” He eventually became “Uncle Tio” to his nieces and nephews, and “Papa Tio” or “Papa T” to his grandchildren. The Southwest Bank of Texas in Houston is where Ted began his 20-year banking career. He became a father, his self-proclaimed greatest role in life, beginning in 1991. He and Rosemarie were blessed with three children, Hayden, Katrina, and Vance. In 1997, he returned to the Rio Grande Valley, eager to give up rush hour traffic and raise his family in familiar surroundings. He enjoyed being back home where he could pursue his passions for golf, dove hunting, dog training, and fishing at the Arroyo. He worked for City National Bank of Weslaco as the Senior Vice President and then President. Active in his community, Ted served on the Boy Scout Council, Lions Club, Red Coat Ambassadors, and as president of the Chamber of Commerce. He was a member of the First United Methodist Church and was active as Head Usher, a finance board member, and a member of the choir under the direction of his loving wife Rosemarie. Ted was the quintessential family man, coaching his children in Christian Youth Basketball League for many years and teaching all three how to swim, golf, hunt, fish, and sing The Wesley Grace for family sit-down dinners. Having family, friends, and guests over to share a meal were priceless to Ted as he loved a large gathering around the BBQ pit and the dinner table. He was a consummate storyteller and loved recounting childhood memories and funny stories from the past. He was the kind of dad who got down on all fours and played with his children. He spent countless hours when the children were young, throwing a ball, playing hide and seek, and giving bucking bull rides in the living room. Ted was always a generous and loving father. About 5 years ago Ted had a dream to purchase Weslaco Borderland Hardware, a business that had been a mainstay in the community since 1919. Ted saw the potential to restore and strengthen the business and support the effort to keep downtown Weslaco thriving. This year, Ted and Rosemarie became full owners and operators of Ace Borderland Hardware in Weslaco, which will be a lasting legacy for his family. Ted is preceded in death by his first grandchild, Joaquin Phillip Ellis; his paternal grandparents Will and Ruth Ellis; his maternal grandparents Keith W. and Patricia Green; and uncles Richard Green, Bill Green, and Dick Ellis. He is survived by his devoted wife, Rosemarie; parents, Bill and Patricia Ellis (Rio Hondo, TX); children, Hayden and wife Claire Ellis (Weslaco, TX), Katrina and husband Brian Sherman (Gonzales, TX), and Vance Ellis; grand-daughters, Magdalena Rose Sherman and Quinlynn Jo Ellis; sister, Kathy Fisher; brother, Keith Ellis (Melanie); nephews, Leo and Wesley Ellis; nieces, Emilie Fisher and Cora Ellis; brothers in law, Jimmy Sanfilippo (Kristy) and Steven Sanfilippo (Stacey); sisters in law, Neena Taylor and Katherine Burton; and numerous nieces and nephews. Visitation will be held on Wednesday, October 16, at McCaleb Funeral Home from 1-9 pm, with a prayer service at 7 pm. The funeral service will be held on Thursday, October 17, at 11 am, at the First United Methodist Church in Weslaco. Contributions can be made to Hydrocephalus Association https://www.hydroassoc.org/ or the American Cancer Society https://donate3.cancer.org/?campaign=search&utm_source=google&utm_medium=cpc&utm_campaign=%5BB%5D+American+Cancer+Society+-+Exact&utm_term=american%20cancer%20society&utm_content=0li8aKa1_dc|pcrid|338260107263|pmt|e|pkw|american%20cancer%20society|slid||pgrid|33476795001|ptaid|kwd-52581190|&gclid=EAIaIQobChMIxq6TwNyh5QIVQdbACh2ZFw7JEAAYASAAEgKLUvD_BwE in Ted’s honor.

The family of Theodore "Ted" P. Ellis created this Life Tributes page to make it easy to share your memories.

Send flowers to the Ellis family.