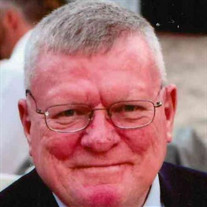 Weslaco- Thomas Michael Blessington, Jr. “Tom,” 73, passed peacefully on Friday, February 7, 2020. He was born to Thomas Michael Blessington Sr. and Anna M McHugh Blessington on August 28, 1946, in Boston, Massachusetts. Tom grew up in Weymouth, Mass, with his older sister, Janice. As a teenager, Tom was active in hockey and played in a local league. He also began showing an interest in horticulture as a young child and had a natural green thumb and love of nature. Tom attended Norfolk County Agriculture School, where he graduated from high school. He then attended The State University of New York at Cobleskill, where he met Terry Zimmer. Tom and Terry were married in 1969 and moved to Maryland so Tom could continue his education. He worked as the Horticulture greenhouse manager at the University of Maryland College of Agriculture, while he earned his Bachelor’s, Masters, and Ph.D. Tom and Terry moved where Tom’s career led. He was a professor, researcher and administrator at the University of Maryland, University of Nevada, and Mississippi State University. At one point in his career, he was the youngest Academic Department Head in his field. He authored numerous professional publications and books In 1986, Tom was recruited to Weslaco as the Director of the Texas A&M Experiment Station. He also spent time at Texas A&M College Station, and finally retired from the University of Maryland in 2011, where he had been commuting from Weslaco. As a youth, he also enjoyed water skiing, ice-skating, boating, and his cars. Professionally, Tom admired, enjoyed and worked well with numerous undergraduate and graduate students. He also loved to laugh and enjoyed spending time with his family. Tom’s favorite hobby never wavered, he always loved working with plants. Tom is preceded in death by his parents, Thomas Sr. and Anna Blessington and sister, Janice Carlson. He is survived by his wife of fifty years, Terry, daughters, Trisha Haley (Christopher) of Lafayette, La. and Tyann Blessington of Washington, D.C., grandchildren, Emma Kate, Curtis, and Benjamin Haley, sisters Gail VerColen (Jim), Mary Jo Weckesser (Thomas), and Karen Heagney (Brian), and numerous nephews and nieces. The family would like to offer their sincere appreciation for the love and compassionate care given to Tom at Mid Valley Nursing and Rehab in Mercedes. The family would like to thank Trey Johnson for his caring friendship to Tom and Terry. Father Francisco Solis will celebrate a memorial mass at St. Joan of Arc Catholic Church in Weslaco on Monday, February 10, 2020, at 2:00 p.m.