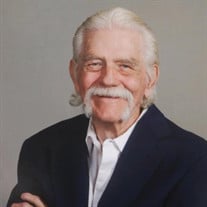 WESLACO - Truman Olson died February 1, 2021 at Valley Baptist Medical Center in Harlingen, Texas at 8:15A.M. He fought his final battle with congestive heart failure the same way as he lived his life: with grit, courage, conviction, and discipline. Born in Mercedes, Texas, he graduated from Mercedes High School in 1959. He obtained a B.S. from Texas A & I in Kingsville, Texas. He was a long-time employee of Tide Products, which would later be known as Wilbur Ellis, where he was an agricultural crop consultant (or, as he referred to himself, a “fertilizer peddler”). He was the first to be recognized by the Texas Ag Industries Association for providing outstanding service as a certified crop advisor in Texas agriculture. Upon retirement in 2008, he picked up his hammer and Bible and began doing missionary work in San Lazarus, Nuevo Leon, where he built church benches, houses, furniture, doors, and greenhouses. He advised farmers on animal husbandry and how to diversify their crops, develop cash crops, and improve corn yield. But mostly he harvested souls for the Lord Jesus Christ, which was his real calling. Together with his wife, Josie, he helped plant a church in Mercedes, Christian Fellowship Worship Center, where he was a beloved Sunday School teacher. He was proceeded in death by his mother, Maude Marion Olson, and his father, Orrion Olson. He is survived by his wife and best friend, Josie Cintron Olson; his children, Erin (Ray) Graybill, Heath (Norma) Olson, Megan Martinez, Lee Puckett; his beloved grandchildren, Johanna Saldana, William Puckett, Gabriela Martinez, Max (Alondra) Graybill, Jake Puckett, Molly Graybill, Savannah Olson, Jenna Puckett, Judah Graybill, Sam Graybill, Sierra Olson, Jason Puckett; great-grandchildren, Benjamin and Julian Saldana; and sisters, Maude Marion McClendon and Theresa Height; and many nieces and nephews. He will be greatly missed not only by his family, but by his beloved church family, his friends Pastor Andy Esquivel of CFC Mercedes and Pastor Ramiro Araguz of Nuevo Progreso, Mexico, and the children he mentored. The family would especially like to thank his doctors for their care, love and commitment: cardiologist Dr. Eduardo Flores, family doctor Dr. Suja Parakathu, and her PA, Shawn Adams. From age 18, he had one health battle after another, including juvenile diabetes, tuberculosis, Guillen-Barre (French polio), cancer, heart disease, and more. At no time in his adult life was he completely well. Yet, he never complained, and with his incredible discipline, courage, faith, and stoic resolve, he accomplished so much in almost 80 years. A wise, caring, and humble man, his advice will continue to guide his family: never believe your own publicity, always know where you are, and always be on time. But the greatest concern in his life was revealed in his daily prayer: may the Holy Spirit convince everyone of their need for Jesus Christ.

The family of Truman T. Olson created this Life Tributes page to make it easy to share your memories.

Send flowers to the Olson family.