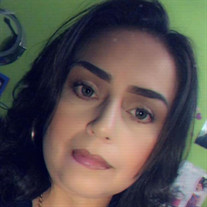 Mercedes- Veronica Esquivel, 46, passed away, surrounded by family, after a courageous battle with cancer, on Friday, October 8, 2021. On July 11, 1975, Veronica was born to Dionicio Martinez and Ana Maria Gutierrez in Rio Bravo, Mexico. Veronica grew up in Rio Bravo and entered several beauty pageants as a young girl. Then, her family moved to Weslaco, and Veronica attended Weslaco High School, where she was active in ROTC. She also met her soulmate, Ramon Esquivel, while still a teenager. Ramon and Veronica were married in 1994 and spent the rest of their lives together. Veronica and Ramon had two children, Ramon Jr. and Jaqueline. Ramon Sr. was a great provider and worked hard so that Veronica could stay at home with her children. He also provided her favorite pastime, shopping. Veronica was a “shop till you drop” kind of person. Veronica was charismatic, outgoing, and the life of the party. Her personality lit up any room and was a welcome comfort to any occasion. She loved to listen to music and go out dancing with her soulmate. Veronica was artistic and enjoyed drawing. Veronica was able to travel all over the United States and Mexico. She and Ramon took their two children with them wherever they traveled, and their family trips were priceless. Veronica was a great homemaker. First of all, she was a great cook. Veronica did all of the cooking, even outdoors. She took over the barbecue pit and could grill just about anything to perfection. Veronica’s tacos, beans, rice, and barbecue will be remembered fondly by her family and friends. She also made every Holiday special, especially Christmas, where the family tradition was to pray for baby Jesus and eat mom’s special treats. Veronica was diagnosed with breast cancer in 2014, and she faced it with great courage. She often referred to herself as Wonder Woman. But, for those that knew her story, Wonder Woman would not even do Veronica justice. Veronica was a devout Catholic and prayed often. She led by example, showing patience, love, laughter, and steadfast devotion to God and family. Veronica’s granddaughter was the light of her life, and she spoiled her as often as possible. She is survived by her parents Dionicio Martinez and Ana Maria Gutierrez husband, Ramon Esquivel Sr., son, Ramon Esquivel Jr., daughter, Jaqueline Esquivel (Juan Mendez), and granddaughter, Destiny Michelle Mendez, all of Mercedes, siblings, Olga “Lilly” Martinez (Russell Bryant), Yazmin Martinez, both of Kyle, Ana Maria Valdez (Matthew) of New Mexico, Luis Martinez of Mercedes, Carols Martinez (Griselda) of Arizona, and Alberto Martinez (Teresa) of Weslaco. Visitation will be Tuesday, October 12th, 10 am-9 pm, with a rosary at 7 pm, at McCaleb Funeral Home. Mass will be celebrated on Wednesday, October 13, at Sacred Heart Catholic Church in Mercedes, followed by burial at Sacred Park Cemetery.

The family of Veronica Esquivel created this Life Tributes page to make it easy to share your memories.

Send flowers to the Esquivel family.