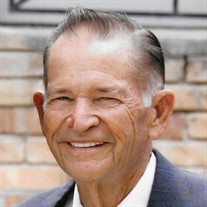 William Rudolph (W.R.) Jones, aged 85, passed away peacefully on September 11, 2021, surrounded by those he loved. He was preceded in death by his parents, Margaret and Paul Jones, and two sisters, Paulanna Milligan and Barbara Bright. He is survived by his loving wife of 59 years, Sharon Jones, sons Brian Jones (Lisa) and Michael Jones (Bonnie), daughter Jill Rork (Patrick), brothers-in-law Harvey Milligan and Jim Swint, 8 grandchildren, 1 great grandchild and numerous nieces and nephews. W.R. grew up on the family farm outside Edcouch, TX. He learned to drive a tractor early in life and remembered pulling trailers to town as a young 10-year-old boy. He graduated from Texas A&I with a degree in Agronomy and then served in the Army for two years. W.R. met the love of his life, Sharon, in an Edinburg bowling alley. They married just six months later in 1962, right after cotton planting season. They raised their three children on his beloved property that their son, Brian, continues to farm. W.R. was a wonderful teacher for Brian, passing down his wealth of knowledge, and took great pleasure in seeing him take over the family farm. W.R. volunteered in the farming community by serving on the boards of both Elsa Co-op and Mercedes Co-op Gins. Though he always said he could never spell well, he was a lifelong learner and skillful with his hands. He was able to repair pretty much anything, often in novel ways, pouring over manuals and later the internet. He was meticulous to the last detail and continued to help when able on the farm. W.R. spent his life outdoors not just farming but also hunting quail and fishing the Laguna Madre with family and friends. He spent many weekends as a youth and teenager fishing at a cabin on the Arroyo Colorado with his mother and father. He greatly enjoyed the companionship of his dogs throughout his lifetime. From his beloved house dog Sugar Bear, his bird hunting dogs that he trained in his middle age, to his various watch dogs in his later years, he found much pleasure in playing with and walking his dogs every morning and evening. In his retirement, dancing became W.R. and Sharon’s favorite way to spend the fall and winter. They enjoyed the dance circuit at the retirement parks and making new friends from the north, as well as running into local friends who also enjoyed dancing. Grandad was much loved by his grandchildren, having made lifelong memories of Christmas and July 4th holiday family gatherings. It was always a great time to go to the farm to ride tractors and explore the property. W.R was devoted to Sharon’s health, being both her eyes and ears. Their marriage has been an example of love and commitment for their sons, daughter, and grandchildren. Always stubborn, sometimes ornery - words he would use to describe himself – W. R. was devoted to his family. He had a fierce drive to live life well until the end. He was an inspiration to his family to enjoy life as best you are able every day. The family wishes to thank his long-time doctors, Dr. Shridhar Kotta and Dr. Charles Mild, for their many years of wonderful care. Chapel Service will be held on Thursday, September 16, 2021, 2:00 p.m., at McCaleb Funeral Home in Weslaco, TX. Visitation with the family will follow the service. A graveside service will be held on Friday, September 17, 2021, 3:00 p.m., at Highland Memorial Park in Weslaco, TX. In lieu of flowers, the family asks that a donation be made in his memory to the American Heart Association or other charity of your choice.

William Rudolph (W.R.) Jones, aged 85, passed away peacefully on September 11, 2021, surrounded by those he loved. He was preceded in death by his parents, Margaret and Paul Jones, and two sisters, Paulanna Milligan and Barbara Bright. He is... View Obituary & Service Information

The family of William Rudolph "W.R." Jones created this Life Tributes page to make it easy to share your memories.

Send flowers to the Jones family.