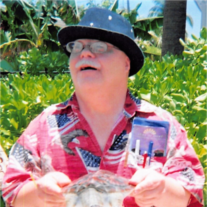 Weslaco- Americus “Mark” Revelle, 66, passed away on Monday, January 6, 2020. He was born on June 29, 1953, to Lawrence William Revelle and Freda Shirley in Cape Girardeau, Missouri. Mark was the youngest of nine siblings and was a true gift from God.

Mark was born with Down’s Syndrome and his parents believed the valley climate would be good for his health. They bought some land in Donna and began a career in farming. Mark was a joy to be around, always full of love and laughter. He enjoyed puzzles, watching movies, and traveling. He was able to take lots of fun trips, including a few train rides that stopped in Disney World and one that went to Canada. He enjoyed several cruises, including one to Alaska.

Visitation will be Thursday, 5-8pm, at McCaleb Funeral Home in Weslaco. Funeral service will be Friday, January 10th, 10 am, at First Baptist Church in Donna. Burial will follow at Highland Memorial Park in Weslaco.

To order memorial trees or send flowers to the family in memory of Americus Revelle, please visit our flower store.