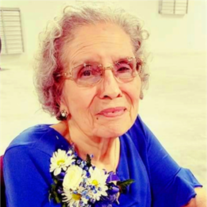 Anita was a woman of God, with a deep faith that carried her through 43 years battling cancer and heart disease. She was baptized, confirmed, received her 1st Holy Communion and married at St. Joan of Arc Catholic Church in Weslaco. She taught CCD as a member of the Medalla Milagrosa, a church society she proudly supported for decades. In 1967, she joined St. Pius X Catholic Church, where her children attended CCD religious education classes and received their Holy Sacraments, too.

Anita attended Weslaco ISD public schools until her Junior year when she had to help her parents support her family by working on the cotton fields in West Texas. It was in a small Crosbyton, Texas cotton ranch where she was born on November 3rd, 1937. Her family relied on her to keep track of their daily production, helping her father manage the family work during the migrant seasons. On February 25th, 1962 she married the love of her life and started raising her family. Her Servant heart led her to work as a caregiver for 35 years at John Knox Village.

Anita was committed to her family, volunteering as a Panther Corps Band Booster from 1965-1992, when her brother and sisters, and children played in the marching band. She was also a cheerleader booster, supporting her daughter Ana. She rarely missed a football game, and could often be seen volunteering at the Junior Class concessions and Bandstands. Her favorite event was always the annual UIL Pigskin Jubilee.

She is remembered in the Weslaco ISD school district for delivering fresh oranges from her backyard’s orchard, often dropping off goody bags for her children’s classmates. Including her home-baked cupcakes and her famous pan-de-polvo. “Mami’s Cookies,” as her grandchildren call them, were delicious, popular and loved by all. This gift-giving continued into her children’s college years, mailing care packages just because or during finals. She was the proudest Mom when her children graduated from Trinity, Baylor and UTPA, with Bachelors and Masters degrees.

Anita poured her heart and soul into giving back to her endeared “All-America City of Weslaco, Texas” serving as an Elections Judge for decades, elected State delegate for many conventions. She loved volunteering and raising funds for the American Cancer Society, and Mid-Valley Relay for Life, in honor of her niece Ana Maria Sanchez-Gandara. She could often be seen helping at her childrens’ schools, serving as a PTA officer, and eating lunch in the cafeteria with her children in elementary school.
She enjoyed crossword puzzles, Easter egg painting for her grandchildren, which she collected year-round as her labor of love, and was a loyal supporter of her Dallas Cowboys, Texas Longhorns, Baylor Bears, and enjoyed watching her Houston Astros with her husband. She also loved cheering for the Weslaco Figueroa pro boxers. She enjoyed reading The Monitor daily, keeping up with national politics on CNN, never missing an election to exercise her right to vote, and was known for writing personal handwritten notes to family and friends, expressing her love and gratitude for birthdays and special holidays.

Anita was a selfless-giver. She will be cherished by the many hearts she touched. And to her family, she will always be an inspiration and a guiding light. She will forever be remembered for her immense love of family and will live on in her children’s hearts forever.
On behalf of Anita and her family, we offer our heartfelt gratitude to her caregivers, nurses, and doctors.

The family would be honored for you to join them in a Life Celebration on Sunday, February 23rd, 1-9 pm, Holy Rosary, 7 pm. Holy Mass will be celebrated on Monday, February 24th, at 2 pm, St. Pius X Catholic Church in Weslaco. Burial will follow at Sacred Park Cemetery in Mercedes.

“I have the fought the good fight, I have finished the race, I have kept the faith.” (2 Timothy 4:7)

To order memorial trees or send flowers to the family in memory of Anita Sánchez Garza, please visit our flower store.