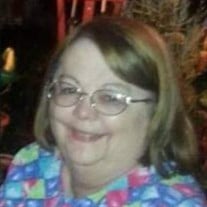 Donna-Barbara J. Lewis, 72, passed away at Knapp Medical Center on Saturday, August 20th, 2022. Barbara was born on May 21st, 1950, in Dayton, Ohio, to James and Hope (Thorpe) Windom. Barbara was the second eldest of five siblings. She grew up in Vandalia, Ohio, and graduated from Vandalia Butler Highschool. Barbara joined the United States Airforce immediately after graduating, where she met her soulmate, Errol Lewis. Barbara was ambitious and driven. She worked her way up to Sergeant in her two-year tenure in the medical department. A wedding to Errol followed Barbara's honorable discharge in 1970.

Errol was from Edcouch, so the couple moved to the Rio Grande Valley. They lived in Edcouch, Weslaco, and California before settling in Donna, where they raised their sons, Lance and Scott, and spent the rest of their lives together.

Barbara's natural drive led her to a full-time career in accounting. She spent many years working accounts payable at Scrivner Inc. When Scrivner closed, Barbara could have easily justified retiring, but she continued to work many more years in the accounting departments for several local eye doctors.

As a working mom, Barbara had her hands full, but she still managed to take plenty of camping trips, and the family made it a point to take the boys on a summer vacation every year, making priceless memories. Barbara also loved shopping and collecting unique rocks, sea shells, and frog figurines. Her favorite jewel was topaz. Other than that, she was humble and simple. Barbara would prefer to spoil her precious grandkids, who she adored.

Barbara is preceded in death by her parents, James and Hope Windom, her husband of fifty years, Errol, and sister, Stella Keen.

Celebration of Life will be on Tuesday, August 30th, 10:00am, at McCaleb Funeral Home in Weslaco. Burial of ashes will follow at Rio Grande Valley State Cemetery in Mission at 1:00pm with full military honors.
To order memorial trees or send flowers to the family in memory of Barbara J. Lewis, please visit our flower store.