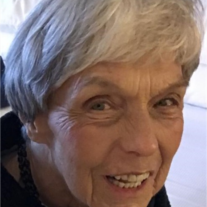 Weslaco- Carol A Barnes, 82, passed away Wednesday, December 11, 2019. She was born on June 2, 1937, to Franklin E Walter and Rita Paskert in Cleveland, Ohio. Carol was the second eldest of seven children. She assumed the role of big sister quite well and was like a second mom to her younger siblings.

After high school, Carol attended Simmons University in Boston, Massachusetts, where she earned her Bachelor’s Degree. Carol’s first job was with Ocean Spray Cranberries in their test kitchen developing recipes and promoting cranberries in the media. Through family connections, she found living space in return for providing companionship to an older woman. The woman’s grandson, Philip S. Barnes Jr., became a frequent visitor and they were married on November 3, 1962.

They had three daughters and a son and Carol happily became a loving and caring mother. As the children got older, Carol opened a successful Bed and Breakfast in Plymouth. When the opportunity developed to acquire an early colonial era home in Plymouth, she opened a new Bed & Breakfast and later added a successful floral design studio providing services for weddings and events only. Carol was a naturally talented interior designer, floral designer, and gardener. She used her gifts to create a beautiful, comfortable atmosphere with unique character and charm.

Carol retired after Philip’s passing in 2007. She moved to Florida to enjoy the warmer climate for several years and then to Weslaco, Texas, about five years ago, where she resided with her oldest daughter. Carol was an avid reader, an accomplished cook especially baked goods earning her the nickname “CooCoo”, and she enjoyed the outdoors, especially the beach and water. Carol loved spending time with family and friends.

Carol is preceded in death by her parents, Franklin and Rita Walter and her husband, Philip S. Barnes Jr.

In lieu of flowers/gifts, contributions can be made to The Plymouth Antiquarian Society, PO Box 3773 Plymouth, MA 02361.
To order memorial trees or send flowers to the family in memory of Carol A. Barnes, please visit our flower store.