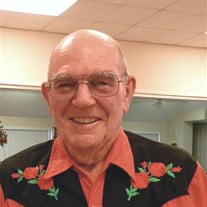 WESLACO - Dale Herman Rodenbeck was born April 11, 1934 in Bristow, Iowa, and passed away at his home on September 8, 2022. He was the third of eight children born to Herman and Anna Dirks Rodenbeck. Growing up in that crowded, boisterous family likely contributed to his enjoyment of being around people. He became actively involved in whatever community he joined and was known for his smile and friendly demeanor. When Louann was busy for an evening and Dale was at home, his daughter was likely to get a call from her dad, just to hear a voice.

Dale attended Norton’s Corners’ Elementary, the neighborhood school a mile or so from the farm he grew up on, through 8th grade. He graduated from Shell Rock High School in 1951. He did carpentry work around Shell Rock for two years before entering the army in January of 1954. He served in an engineer unit at Camp Carson, Colorado, until 1956. Dale followed active service with 8 years in the Army Reserves, earning a Good Conduct medal and a National Defense Service medal.

He returned to Shell Rock, again doing construction. At a dance in Janesville, Iowa, he met Louann Muhlenhaupt, a nursing student from Readlyn, Iowa. They married on August 18, 1957, at St. Paul’s Lutheran Church in Readlyn, Iowa. Dale built their first home in Shell Rock where they welcomed their first child, Dennis Dale in 1958.

In 1962, Dale joined Iowa Public Service Company as an apprentice lineman in Clarksville. As the song says, he was a “lineman for the county” until 1995, retiring as a small crew foreman. 1962 also brought their second child, Nancy Ann. Dale was called out on the day she was born, and the day she was baptized. She grew up to admire his work ethic - when the phone rang, he answered the call.

In 1966, Dale transferred to Charles City on the electric service crew. That year their second son Scott Steven was born. Dale raised his family in Charles City and was a charter member of his church, Messiah Lutheran. He and Louann were active square dancers, traveling to dances around the region from 1974 to 1999. Dale also enjoyed traveling and camping in Iowa, Minnesota, and Wisconsin. Summer weekends and evenings he could often be found boating with his kids and their cousins.

After retirement, Dale and Louann continued to travel, visiting their daughter and grandchildren in Vermont and other relatives in California and throughout the Midwest. 33 years of being called out in all types of weather led them to winter in the Rio Grande Valley of Texas. They soon sold their acreage in Charles City and bought a mobile home in Siesta Village, Weslaco, Texas. Always one to be busy, Dale spent many happy hours woodworking when he first retired. When their daughter moved to Vermont, Dale and Louann spent each spring and fall in Iowa, summers with their grandchildren in Vermont, and winters in Texas. In 2019 they became full-time Texans.

Dale joins his parents, two siblings, and both sons in the heavenly kingdom. He is survived by his wife of 65 years, Louann, his daughter and son-in-law, Nancy and Keith, and two grandchildren, Callie and William.

Funeral arrangements pending with McCaleb Funeral Home of Weslaco.
To order memorial trees or send flowers to the family in memory of Dale Herman Rodenbeck, please visit our flower store.