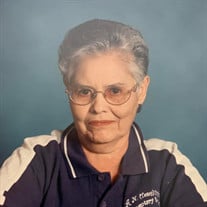 Weslaco: Estela De La Peña Guerra, 84, passed away at her home in Weslaco on Friday, August 5th, 2022. Estela was born on December 11, 1937 to Rodolfo and Romula (Olivarez) De La Peña in Rio Grande City. The family moved to Weslaco when Estela was a young girl. The De La Peña's quickly established themselves as Weslaco's founding pioneers. Rodolfo and Romula were a great team, and they were entrepreneurs. Their restaurant and bakery, El Porvenir, soon became a local favorite dining place. The De La Peña's were ambitious and driven to succeed. They delivered Romula's delicious tamales around town to businesses and were a must-have during Christmas. As with any successful business, the De La Peña's embraced the Weslaco community socially and politically. They taught Estela and her siblings the value of integrity and community service early.

The De La Peña's all worked in the bakery and restaurant business, where Estela met her soulmate, Eduardo, who happened to be working at El Porvenir. Estela and Eduardo were married in 1958 at St. Joan of Arc, where they faithfully attended mass for the rest of their lives.

Estela continued working in the family business until her parents retired in the early 70s. After that, Estela could finally pursue her passion for working with children. She worked for Weslaco ISD for the next twenty-five years. One of her specialties was helping underprivileged children, and she would often make home visits to ensure their welfare. In addition, Estela continued baking and was notorious for her wedding cakes, which were beautifully decorated and delicious. Estela's brother Rudy followed in her parent's footsteps. Eduardo continued working for the De La Peña family, helping manage the construction and laundromat business.

Estela and Eduardo enjoyed traveling and were able to see much of the world. They visited Puerto Rico, the Virgin Islands, the Bahamas, Mexico, Canada, New York, Washington DC, and California, to name just a few. In addition, Estela and Eduardo took frequent trips to Louisiana and Las Vegas, making precious memories.

Estela's favorite thing to do with her time was to spend it with her grandchildren. She was so proud of her children and grandchildren and wasn't shy about telling anyone and everyone about their countless accomplishments.

Estela was energetic and had a spirited personality. She was generous, compassionate, and brightened up any room with her beautiful smile.

Visitation will be Friday, August 12th, 10 am-9 pm, with a rosary at 7 pm, at McCaleb Funeral Home. Father Francisco Solis will celebrate funeral mass on Saturday, August 13th, at 10 am, at St. Joan of Arc Catholic Church in Weslaco, followed by burial at Weslaco City Cemetery.
To order memorial trees or send flowers to the family in memory of Estela De La Peña Guerra, please visit our flower store.