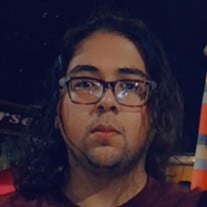 Weslaco: Gabriel Infante, 24, passed away on Friday, June 24, 2022, after suffering a heat stroke while working in San Antonio. Gabriel was born on December 22, 1997, to Roberto Isabel and Velma Infante in Weslaco, Texas, the youngest of five siblings. Gabriel grew up in Weslaco and loved animals, growing up in a house with many pets. Gabriel was musically inclined. He took advantage of his God-given talent and became passionate about music and singing. Gabriel learned to play the saxophone and was active in Weslaco Panther Corp and the Weslaco High School Jazz Band.

After graduating in 2016, Gabriel and his lifelong friends, Joshua Espinoza, Patrick Martinez, and Alberto Cabrera, moved to San Antonio. Gabriel was working his way through college, still attending UTSA, when he got overheated on the job. Before working outdoors, Gabriel had been working at McDonald’s for several years.

Gabriel was most passionate about music and singing, but he was also creative and could write beautiful stories, essays, or thoughtful expressions. He loved anime, a style of animation originating in Japan, and manga, which are comics or graphic novels, both games of endless creativity. Gabriel also enjoyed gaming and competing with friends.

Gabriel used his creativity to create and share funny memes with family and friends. He was most content when his imagination made others laugh and brightened their day. Gabriel’s family and friends were priceless to him.

Gabriel was a child of God, and his faith was essential to who he was. Gabriel received all of his sacraments through the Catholic Church.

Gabriel is preceded in death by his dad, Roberto Isabel Infante, and grandmother, Ana Maria Flores.


Visitation will be Tuesday, 10 am-9 pm, with a rosary at 7 pm, at McCaleb Funeral Home. Visitation will continue on Wednesday, 10 am-1:30 pm, followed by Mass at St. Joan of Arc, celebrated by Father Francisco Solis at 2 pm. The cremation service will be private.

For those wishing to contribute to the funeral services, please enter "Gabriel Infante" in the memo.
https://portal.icheckgateway.com/McCalebFuneralHome/Default.aspx
To order memorial trees or send flowers to the family in memory of Gabriel Infante, please visit our flower store.