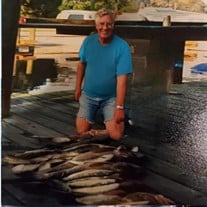 Harlan B. Meyerink of McAllen, TX, died on the morning of November 14th, 2022, with his memory intact.

The youngest son of Gerrit H. and Jeanette (Bolt) Meyerink, he was born in 1943 in Platte, South Dakota, and lived through great change. He remembered his brothers, Robert, Ray, Cliff, and Don, showing him how to turn on and off the first electric light bulb he had ever seen. He remembered the tragic death of his young sister Linda and the restoring power of the arrival of his beloved sister, Jan.

He also remembered a career that spanned three midwestern states and unimaginable technological advancements in the computer industry in which he worked.

He remembered raising his two daughters, Debra ((Devon) Vande Voort) and Diane ((Jeffery) Woodhead), along with his wife of the time, Esther (Gant) Meyerink.

He remembered celebrating the arrival of his two grandsons, Michael Kuhn and Jonathan Woodhead, with kid-sized fishing poles.

He remembered fishing buddies, hunting trips, and cribbage games over lunch. He remembered those he volunteered alongside for various causes he believed in. He remembered his Paradise Park community and the special lady friend, Susie Parker, whom he met there.

The family would like to express our deep appreciation for Ms. Parker, as well as Allstate Hospice (Edinburg, TX) and all of the people that contributed to his care.

***********
*At the request of Harlan, there will be no public memorial.
To order memorial trees or send flowers to the family in memory of Harlen Bruce Meyerink, please visit our flower store.