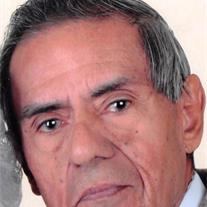 Weslaco- Julian "Julio" Nava Mendoza of went home to his final resting place on September 6th, 2019 surrounded by his loving family. Born into a pioneer Donna family on June 18, 1934, he was the son of Telesforo Mendoza and Inez Nava Mendoza. Julian was very proud that he was a son of East Donna.

The Mendoza family moved from Donna to Harlingen and later settled in Weslaco in 1948. Julian was a member of the WHS 1953 graduating class. During high school, he developed an interest in journalism and photography and was a sports columnist for the school paper, The Hi-Life. He continued his studies at Edinburg Junior College (UTRGV) where his love of photography peaked. He was a photographer at Medellin Photo Studio and Badger Photography. In October 1957, while employed at KRGV Channel 5, he photographed Sputnik, the Russian Rocket. During a brief stay in Chicago, Julian sold cameras in the Loop at the oldest photoshop in that city.

Julian started his 33-year career with the Valley Morning Star in 1963. He took first place honors in 1967 in a United Press International (UPI) photo contest for his photo taken during Hurricane Beulah. The same year, he placed third for photographing Vietnam War casualties. In 1976, at the Confederate Air Force (CAF) Show in Harlingen, he photographed a re-enactment of the Atomic Bomb that caused an international incident. Julian shot a world-renowned photo of the realistic-looking mushroom cloud the instant it went off. Time Magazine published the photo and Newsweek wrote an article about the re-enactment of the Atomic Bomb. The Japanese government strongly protested and demanded an apology. The United States government apologized for the incident, but the CAF Colonels did not comply.

His press clearance afforded him the opportunity to work in Europe and Mexico’s extremities, to be present at many security-sensitive historical events, and to photograph world-renowned leaders. Throughout his career, Julian photographed many dignitaries including Presidents Lyndon B. Johnson, Richard Nixon, Ronald Reagan, and Bill Clinton; several Mexican Presidents; Pope John Paul II and Cesar Chavez. His camera captured many significant events including the groundbreaking of the Marine Military Academy, the groundbreaking of the U. S. Expressway 83, and the fire at the Harlingen Country Club in 1967. During the 60s, 70s, 80s, and 90s he could be seen running up and down the sidelines taking pictures during Friday night football games for the Harlingen Cardinals and Weslaco Panthers to be published the next morning in the Valley Morning Star and Weslaco High School La Palma yearbook.

After retirement, Julian enjoyed volunteering at the Donna Hooks Fletcher Historical Museum and the Santa Ana National Wildlife Refuge. He also drove patients to the Shriners Hospital for Children in Houston and volunteered for the American Red Cross. After his "Honey" do's he worked part-time at Security Depot and McCaleb Funeral Home. He was also the bicycle repairman for the neighborhood and was the grill master for Honey and grandchildren.


Visitation will be held on Tuesday, September 10th, from 1-9pm, Rosary at 7 pm, at McCaleb Funeral Home Chapel. A funeral mass will be held on Wednesday, 10 am, at St. Joan of Arc Catholic Church in Weslaco. Burial will follow at Weslaco City Cemetery.


To order memorial trees or send flowers to the family in memory of Julian Nava Mendoza, please visit our flower store.