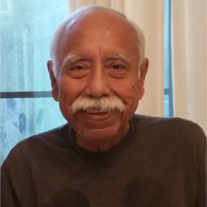 Weslaco- Leon R Marquez passed away on Tuesday, October 22nd, at Knapp Medical Center in Weslaco. Leon was born on June 28, 1943, to Luis Marquez and Josefa Rojas Marquez in Mercedes, TX. The youngest of twelve, Leon spent his childhood in Mercedes in a humble household and later moved to Weslaco as a teenager. As a young man, he helped his family by working in the fields, and he persevered to graduate from Weslaco High School in 1964 and continue his studies at Pan American University.

Upon meeting his soulmate, Irene Rodriguez, at Weslaco High School, they later married on May 17th, 1975, at San Martin de Porres Catholic Church. They made their home in Weslaco and raised four daughters together, Anita, Pearla, Josefa, and Vanessa. The family enjoyed many experiences within the San Martin de Porres parish community.

Leon and Irene provided for their families and created a loving home for their children. Leon worked at JC Penney for most of his career and retired in 2003. He was a dedicated and loyal employee. He enjoyed his friendships inside and outside the workplace. When his wife worked late shifts as a nurse, Leon spent time at his “second job” to care for his girls. Leon also spent considerable time providing care to aging relatives.

Throughout their life together, Leon and Irene made a point to travel and see the states while visiting family. As soon as Leon finished one trip, he was meticulously planning the next. He enjoyed road trips involving his daughters as they grew up, especially visiting colleges or their far away residences.

Leon also enjoyed working in the yard and cultivating his garden. He was a devout Catholic and prayed the rosary every day. Leon was a devoted and loyal husband, and the best father and grandfather anyone could ever want. He loved babysitting his grandchildren and attending their school events. He valued education and was proud of his daughters’ educational pursuits.

Visitation will be Saturday, October 26th, from 1-9 pm and Sunday, October 27th, 1-9 pm, with a rosary at 7 pm, at McCaleb Funeral Home Chapel. Mass will be celebrated on Monday, October 28th, at 10 am, at San Martin Catholic Church in Weslaco. Burial will follow at Highland Memorial Park in Weslaco.


To order memorial trees or send flowers to the family in memory of Leon Marquez, please visit our flower store.