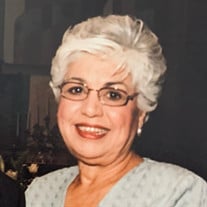 Weslaco: Maria Antonia "Tonie" Fuentes, 78, passed away on Thursday, September 1, 2022, at Doctor's Hospital Renaissance in Edinburg. Tonie was born on October 23, 1943 to Ezequiel Sr. and Angelita (Cerda) Reyna. Tonie was born in Plainview, Texas, because the Reyna family spent half the year migrating as farm workers and the other half in Weslaco. Tonie's parents and her eldest sister, Helen, stressed the value of family, faith, work ethic, and education.

When Tonie was in middle school, she met Jose “Joe” Lisandro Fuentes, her soulmate. They have been inseparable since then. Tonie was athletic and loved sports. During high school, she excelled in basketball. Cheerleading interfered with the family's migration schedule, but Tonie was allowed to stay with her grandparents the summer before her senior year so she could be a cheerleader. Tonie quickly became the "head cheerleader" with her outgoing personality and natural leadership ability. Her natural beauty and friendly character earned her Panther Sweetheart that year, and she was crowned by Joe.

Tonie and Joe wanted to get married as soon as possible, but the Reyna's insisted on education first. So, she earned a Bachelor's Degree from Texas Women's University as quickly as possible. Tonie and Joe were married on August 26, 1966. They spent their first couple of years in Riverside, California, where Joe was attending college. In 1967, Tonie and Joe returned to Weslaco, where they raised their four children. Tonie worked as a coach for Weslaco School District, and Joe completed his Bachelor's degree at Pan American University. A few years later, Tonie and Joe had saved enough money to take a year off to concentrate on earning their perspective Master's Degrees. Tonie worked as a guidance counselor for Weslaco School District and soon became the Director of Guidance Counseling for the school district. She still enjoyed coaching, on and off, as needed.

Tonie and Joe raised their children with the same values that their parents had instilled. Even though Tonie worked full time, attended all the kids' sporting events, and taxied them all over town, she cooked a homemade breakfast every day. Joe also loved cooking, and the family had dinner every night. Tonie was an excellent homemaker, and her baked goods were infamous.

Work ethic class kicked off every Saturday morning. The Fuentes day started with breakfast at 7 am, no excuses, and usually concluded with Joe's barbecue and a football game. The Fuentes family instilled faith every Sunday at 9 am mass, followed by breakfast and spending time with grandparents and family. The day usually concluded with the Cowboy's game and a well-deserved nap.

Tonie lived life to the fullest and touched many lives through her career and ministry. Although work ethic and education were important, Tonie's passion was faith and family. She was a devout Catholic and led a very prayerful life.

After retiring from Weslaco School District, Tonie spent three summers in Tampa, Florida, and earned a third degree as a Spiritual Leader from Divine Mercy University. In 2010, Tonie and her best friend, Maria Elena Ramos, founded Fountain of Mercy Ministries, Inc, a nonprofit lay apostolate organized in response to a request made by Jesus to Saint Faustina Kowalska to live and spread the message of MERCY. Every afternoon at 3 pm, Tonie prayed over a list of petitions for the next ten years. She also counseled countless people who were sick and dying.

Tonie also studied all of the saints, their sacraments, character, and values. In addition, she was able to grow spiritually by going on numerous pilgrimage trips. She traveled to Poland, Italy, France, and Jerusalem. Tonie also went on the Camino de Santiago, a challenging 500-mile pilgrimage across Europe.

Tonie lived a life of servanthood. In addition, she was an inspiration to innumerable students, parishioners, friends, members of the community, and her family.

Visitation will be Monday, September 5th, 10 am-9 pm, with a rosary at 7 pm. Mass will be celebrated at St. Pius X Catholic Church in Weslaco on Tuesday, September 6th, at 2 pm followed by burial at Highland Memorial Park.