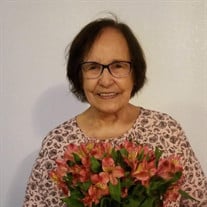 El Paso/Donna- Maria Luisa Blanca Mata, 93, passed away on Tuesday, November 29th, 2022, at McAllen Medical Center. Maria was born on June 19th, 1929, to Jose Maria Ortiz and Carina De La Vina in Los Angeles, California. She grew up in Durango, Mexico. When Maria was a young adult, she moved to Monterrey, where she met her soulmate, Amador Mata. The couple moved to Juarez, where they raised eight children. In 1991, Maria and Amador moved to El Paso.

Maria was a hard worker and cleaned houses as often as she could to help support her family. Her positive outlook and constant state of happiness were magnetic. She loved her children and grandchildren and all kids in general.

Amador passed away in 2010, and Maria moved to Donna with her granddaughter in 2018. Maria was 88 when she first flew on an airplane to visit family in Oklahoma, and she loved everything about it. Maria was an avid reader and loved learning about different cultures, areas of the country and world, and current events. Her most-read book was the Bible. Maria was a devout Catholic and learned as much as she could about her religion. She was also a prayer warrior and spent much of her time in prayer.

Maria also enjoyed coloring, crafts, word searches, and playing Loteria. She was very supportive of all of her children and grandchildren. Maria never forgot a birthday and sent blessings every year to her family and friends.

Maria is preceded in death by her parents and husband, Amador Mata.

Visitation will be Saturday, December 3rd, 10 am-9 pm, with a rosary at 7 pm.
To order memorial trees or send flowers to the family in memory of Maria Mata, please visit our flower store.