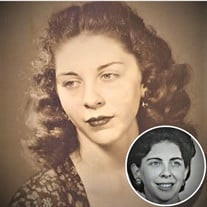 DONNA - Mary Ann Schwarz Vertrees was an only child born to Wendell Theodore Schwarz and Della Mae Alston Schwarz in Mercedes, Texas, on November 1, 1931. Mary Ann (as she was called growing up) had a wonderful childhood. She grew up north of Mercedes among many Schwarz cousins in an area that was nicknamed "Schwarzville". Her grandparents, Philip and Lizzie Schwarz, had come to Mercedes in 1914, from Anahuac, Texas, to settle, build their home, and farm north of Mercedes. The original Schwarz home place property is still in the family, owned by Mary's daughter & son-in-law, Claire & Steve Freeman. Mary's dad, Wendell, was the youngest of Philip and Lizzie Schwarz' eight children, and with Wendell having so many older siblings, this gave his daughter many cousins with whom to grow up. She has stated that she rarely felt like an only child.

Mary attended school in Mercedes and graduated from Mercedes High School in 1949, as Valedictorian of her class. While at MHS, Mary was very active. She was MHS Student Council President, Cheerleader, Football Sweetheart, Bengal Class & Faculty Editor, The Tiger Business Manager, Zeta Eta Sigma member, FHA Corresponding Secretary, V3I's member, FFA sweetheart, Y-Teens Society Chairman, and a member of Quill & Scroll, as well as representing Mercedes at the Citrus Fiesta in Mission and the RGV CoverGirl Contest in Mercedes.

Following high school graduation, Mary attended Edinburg Junior College, graduating ﬁrst in her class with a 4.0 GPA. She met and later married John Nathan "Bill" Vertrees of Donna on December 30, 1951, at the First Baptist Church in Mercedes (the same church where both of their daughters were later married). Bill and Mary settled in Donna and built their home south of town where Bill farmed. They had two daughters, Ann Marie (1956) and Claire Elaine (1960).

Over the years, their family spent many fun vacations in Corpus Christi, San Antonio, and South Padre Island, but most of their travels were in Mexico. Their trips to Mexico included camping out in the mountains near Saltillo, attending a Schwarz' wedding in Linares where they stayed in an old historic hacienda, exploring various other locations in Mexico, as well as traveling to Mazatlan on the Paciﬁc coast multiple times.

When the girls were young, Mary returned to college in Edinburg at what was then Pan American College, to earn her degree. While there, she was a member of Alpha Chi, and in 1968, she again graduated ﬁrst in her class with a 4.0 GPA.

Mary and Bill were staunch supporters of the Donna Redskins and regularly attended their games. They followed the team to their 1961 state championship in football. The family continued their support of the Redskins throughout their daughters' school years and many years after.

Arturo's in Nuevo Progreso was where Bill and Mary could be found almost every Saturday evening, with their best friends, Herbie and Buddy Ennis.

Mary was a housewife, taking care of their two daughters, supporting them in their activities, keeping the books for the farm, volunteering at the Mid Valley Humane Society, and later enjoying her two grandchildren immensely, with regular sleepovers, activities, and outings. Mary was a member of the First Baptist Church in Donna, where she taught Sunday school and served on various committees.

Sometime after retiring, Mary was diagnosed with Alzheimer's. She was cared for by family at home, for as long as possible. Then, Erika Tamayo became Mary's main caregiver (for over 5 years), along with Erika's wonderful staff at TLC. Mary adored Erika and Erika did an outstanding job, always going above and beyond what was expected. Mary died peacefully on the morning of September 15, 2022.

Mary was preceded in death by her husband, John Nathan "Bill" Vertrees in 2001; her parents, Wendell & Della Schwarz of Mercedes, and her in-laws, Ed & Marion Vertrees of Donna.

Special thanks to Erika and her wonderful staff at TLC Assisted Living. In lieu of ﬂowers, donations may be made in memory of Mary Vertrees, to Erika Tamayo (TLC), 15936 State Highway 107, Harlingen, Texas 78552. Our hope is that others needing quality elderly care will be fortunate enough to have outstanding care like our mom had, in the loving Christian environment that Erika and her staff provide.

A private burial for the immediate family was held at Ebony Grove Cemetery.

Funeral arrangements are under the care of McCaleb Funeral Home in Weslaco, TX.
To order memorial trees or send flowers to the family in memory of Mary Ann Schwarz Vertrees, please visit our flower store.