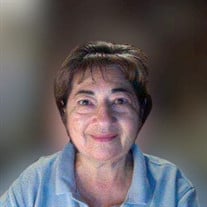 McAllen- Mary Esther Campos Castano was born on September 17, 1946 in Corpus Christi, TX to Maria Josefina Penilla & Magdaleno Castano (both deceased). She was called by the Lord on Tuesday, November 15, 2022. Mary Esther had one son, James Nicholas (Sandra) and one granddaughter, Valerie; two sisters, Mary Lou Leal (Juan +), Christina Eilers (Wayne), nephews, John M. Leal, Matthew Eilers and Clinton Eilers. She attended elementary school in Chicago, business school in Monterrey, N. L. Mexico and obtained her nursing degree in Edinburgh/McAllen, TX. As a young woman she traveled to Europe where, as they say, she caught the love bug to travel and frequently traveled to Spain and many cities in the U.S. She modeled for a dress shop and walked the fashion runway; worked for a travel agency, worked for Libby Foods and Victor Comptometer in Chicago before moving to Texas. Mary Esther will always be known for her enthusiastic spontaneity. She enjoyed giving health advice to everyone she knew, sold Matol health products for many years and enjoyed playing Bingo. Her nursing experience allowed her to care for her parents in their declining years until their passing.
She will be missed by family near & far and by the many friends she made through the years and will be remembered with fondness.
To order memorial trees or send flowers to the family in memory of Mary Campos, please visit our flower store.