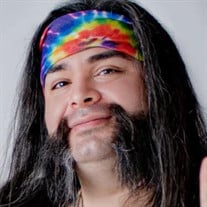 Miguel-Angel Castro, AKA Michael Amanar Grier, 33, passed away suddenly on Monday, June 27th, 2022. Michael was born on November 23rd, 1988, in Laredo, Texas, the first born child of Gabriela and Isabel Castro III. Michael grew up in Laredo, where he graduated from high school and earned a Bachelor's Degree from Texas A&M International. Michael was able to travel to Hong Kong before graduating from college. Spending time in Hong Kong was life-changing for Michael and one of the best experiences of his life.

Michael had a servant's heart. He joined the U.S. National Guard in 2012, which moved him to Brownsville, Texas. Michael met his soulmate, Danielle Grier, shortly after arriving in the Rio Grande Valley. They were an instant match and have been inseparable for the past nine years. Michael and Danielle had a lot in common. They were both passionate about comics and movies and were able to talk for hours about their hopes and dreams. They welcomed their first son, Oliver, in 2020 and Michael was ecstatic. Michael was a true family man and spent most of his free time with Danielle and Oliver, making up silly songs and voices and dancing to Irish folk music.

Michael was naturally creative, musical, and artistic. Michael's creativity and love for scary movies were a perfect combination and earned him a career as an FX artist. His projects included several successful Haunted Houses and theatre productions in the Laredo area.
His enthusiasm for Halloween was a life-long passion that he hopes to pass down to his son. Michael was famous for frightening all the neighborhood kids and many friends and family.

Michael's creativity also found its way into the kitchen, where he spent a lot of time. Michael loved to cook and bake and made the most delicious homemade pizza and chow mein. He had aspirations of opening a restaurant and helped manage several throughout his career.


Contributions can be made at https://www.mccalebfuneralhome.com/pricing-and-resources/#make-a-payment , please enter Michael in the memo.
To order memorial trees or send flowers to the family in memory of Miguel Angel Castro AKA Michael Amanar Grier, please visit our flower store.