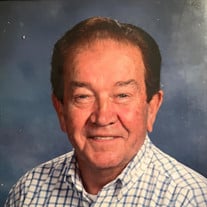 Ray grew up on the family farm until he graduated from Oregon High School in 1956.
Shortly after High school Ray enlisted in the United States Navy. He was stationed on the USS Boxer until 1960. While in the Navy he was trained as an electrician. He was also one of the few that witnessed an underwater nuclear bomb test, Combined Joint Task Force 7 (CJTF-7) and Commander Task Group 7.3 (CTG-7.3), the Navy component for Operation Hardtack, which began in 1958.

After being honorably discharged Ray worked as an electrician at many union companies and even had his own business. He was a proud member of International Brotherhood of Electrical Workers and The National Electrical Contractors Association.

Later in life Ray reunited with Karen Smith, they took plenty of road trips and a few cruises. They found their way to the Rio Grande Valley in 2009 and have been spending winters in the warmer climate since then.

Ray enjoyed reading, crossword puzzles, golfing, Wisconsin sports, going out for coffee with friends and spending time with his kids. He always had a positive outlook on life and enjoyed making others laugh with fun pranks and jokes.

Visitation will be held on Saturday, April 22nd, 2023 at 10am, followed by a Memorial service at 11am, at Holy Mother of Consolation Church, 651 N Main St. Oregon, Wi. Burial will be held at St. Mary’s Catholic Cemetery with military honors.

In lieu of flowers, please make a donation to the American Lung Association, https://www.lung.org/ , or charity of your choice.
To order memorial trees or send flowers to the family in memory of Raphael L. Byrne, please visit our flower store.