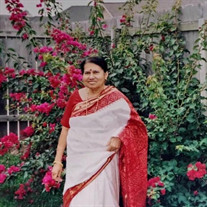 She was then accepted to pursue a Ph.D. in Chemistry under her advisor, Professor S.R. Palit at the Indian Association of the Cultivation of Science, and the University of Calcutta, and she received her degree
in 1964. In 1964, she was awarded a highly prestigious Fulbright Scholarship to travel to the United States for post-doctoral training with the distinguished Professor I.M. Koltoff at the University of Minnesota, Twin Cities. After completing post-doctoral studies, she returned to India as a group leader at the Chemical National Laboratory in Pune, India. Throughout her research career, Dr. Debnath published a large
number of important research papers in physical, organic, and biochemistry including in the Proceedings of the National Academy of Sciences, Journal of the American Chemical Society, and many other prestigious journals in the US and India.

In 1969, she married Professor Lokenath Debnath, upon which she returned to the US. She spent 15 years on the research faculty at East Carolina University (ECU) in Greenville, North Carolina, first in the
Department of Chemistry and subsequently in the Department of Biochemistry in the newly formed ECU School of Medicine. In 1983, she joined the Department of Chemistry at the University of Central Florida
(UCF), where she taught for many years. In 2001, she retired from UCF and then moved to McAllen, Texas, with her husband, when he became Chair of Mathematics at the University of Texas-Pan American (now called UTRGV).

She lived in McAllen, Texas for 18 years and then in Weslaco for the last 3 years. She and her
husband raised a son, Dr. Jayanta Debnath, who received his MD from Harvard Medical School and currently serves as Distinguished Professor and Chair of Pathology at the University of California, San Francisco.

In addition to her husband and son, she is survived by her two grandchildren Maya and Kirin Debnath, her daughter-in-law Dr. Runi Chattopadhyay, MD, and her brother and two sisters currently living in India.
To order memorial trees or send flowers to the family in memory of Dr. Sadhana Debnath, please visit our flower store.