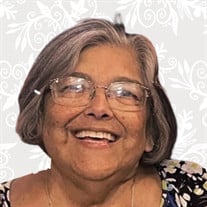 Yolanda Hernandez, wife, mother, and educator of so many children, peacefully passed,
Saturday, Jul 9, 2022, at MD Anderson hospital in Houston.

She was born on August 7, 1952, in Falfurrias, Texas, to Paulino and Guillerma Hernandez, a
local city worker and a cafeteria chef. She was the oldest of four siblings, Angie, Mario, and
Paulino Jr. who she loved wholeheartedly.

Growing up, Yolanda dreamed of having a family and being a cashier at the local convenience
store, but one day, her stars completely realigned. She was enrolled in her high school Gear up
program and was able to go to visit Southern Methodist University. During this visit, she realized
that the world was bigger than just her small town. She was awakened to possibilities and
opportunities. She visited the capital on this trip and had an epiphany; that to achieve these
feats, she would have to go to college. She received her Bachelor's degree in Education from
Texas A&I University. It was here that she also met her love, Mario Alberto, in their Spanish
class. They were married on July 15, 1972. Their eldest daughter, Selina, was born a year later,
and their family began.

In 1974, a Weslaco ISD human resources director, Dewey Baker, journeyed to A&I and recruited
both Mario and Yolanda, beginning her 43-year career, servicing the children of Weslaco.
Yolanda began as a four-year-old program teacher at Vera’s Paladium, which later moved to
Lincoln Elementary. Later on, she worked as a 1st-grade teacher at Roosevelt Elementary,
during which she had her second daughter, Sabrina (Arnold P. LaCount III), and son Mario Luis
(Heather Hernandez). She loved to teach, but she wanted to do more. She wanted to inspire
and provide opportunities to children just like herself, who wouldn't ordinarily see the
potential in themselves because of their financial limitations. She would need to go back to
school to do so. She received her Master’s degree in Education at Stephen F. Austin University,
her Midmanagement certificate, and her supervision certificate so she could become an
administrator. She became a facilitator at Airport Elementary but hesitated to accept any
principalships because she wanted to make sure she was available for all of the major events in
the lives of her children. Her opportunity finally came when a principalship opened up at Rico
Elementary, servicing the very children that mirrored herself as a youngster. It was here that
she shared so many struggles, memories, triumphs, and heartaches with the staff and students that walked through her doors. She found her passion and never wanted to stop instilling in
every child that no matter how difficult their home life was, no matter how financially challenged
they were, they were capable, with a little hard work, of success.

She loved her family with all of her soul and spent her remaining years with her grandchildren,
Crystal, Justin, Nathan, Serenity, Leo, and Luis making sure they were loved as only a
grandmother could.

She is preceded in death by her parents, her sister Angie, and her brother Mario. She leaves
behind her loving husband, Mario Alberto Hernandez, her brother Paulino Jr and his family, and
a family that will always love her, will always strive to be like her, and will always be appreciative
of the woman who gave them her everything.
To order memorial trees or send flowers to the family in memory of Yolanda Hernandez, please visit our flower store.