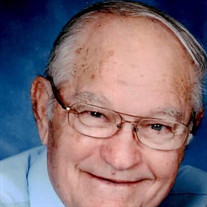 Weslaco- Fred R. Jones, Jr. 89, passed away at John Knox Village on Friday, September 25, 2020. Fred was born on February 20, 1931, to Fred R. Jones Sr. and Lucille Ball Jones. After graduating from Weslaco High School, Fred attended Abilene Christian College before enlisting in the US Army to serve our country during the Korean War. After being honorably discharged, Fred returned to Mercedes and continued the family tradition of farming. He met the love of his life, Betty Moses, and they were married in 1954. Fred and Betty were a great team and were inseparable after that. Together they raised four children. Fred was a hard worker, and the family business thrived. Fred was an avid reader. He was particularly interested in the history of War and could carry on a conversation about any subject. He and Betty loved to travel, especially up to the mountains to enjoy the beautiful scenery. Fred was honest, loving, and dependable. By far, his greatest strength was his character and trust in God. His faith was unwavering, and he was an excellent role model to all who knew him. Fred is now reunited with his parents, Fred and Lucille Jones, his loving wife, Betty, and sister, Emma Jean Haas. He is survived by his children, Steve Jones (Dawn), Pamela Anderson (Don), Brian Jones (Pat), and Larry Jones (Stephanie), grandchildren, Jennifer Fox (Mike), Kimberly Anderson, Lauren Darlington (Jeff), Stephanie Hicks (Joseph), Ashley Jones, Stephen Jones Jr.(Melissa), Samantha, Erica, Alexis, Natalie, Joel, Elizabeth, Benjamin, and Timothy Jones, great-grandchildren, Joseph Cole, Sydney, and Kyle Hicks, Jackson, Grayson Jones, Avery Fox, Atlee Darlington, and Grady Darlington. Visitation will be Thursday, October 1st, 4-7 pm, at McCaleb Funeral Home. Funeral service will be Friday, 10 am, at Bridge Ave Church of Christ, officiated by Rev. Bill Roach. Burial will follow at Highland Memorial Park.

The family of Fred R. Jones created this Life Tributes page to make it easy to share your memories.

Send flowers to the Jones family.