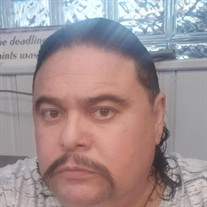 Weslaco: Joel Torres Jr., 50, passed away on Monday, September 27th, at Valley Baptist Medical Center in Harlingen. Joel was born on April 18th, 1971, to Joel Sr. and Teresa Fernandez Torres in East Chicago, Indiana. Joel and the family moved to Weslaco when he was a teen and attended Weslaco Highschool, where he met his soulmate, Mary Moran. They were high school sweethearts and were married in 1989. Joel and Mary soon started their family, welcoming firstborn Jessica, then Joel III, and Joshua. Joel continued his education, graduating from Lincoln Technical School in Arlington, Texas, while Mary stayed in Weslaco, caring for newborn Jessica, and managing her family business, Moran's boots. For the next twenty years Joel took pride in the career he made for himself as a truck driver. It is estimated he clocked over 2.5 million miles to provide for his family. Joel worked for many companies, but eventually opened S.O.S Carriers with his wife as his business partner, daughter Jessica as manager, and son, Joel, a second driver. Joel had an entrepreneurial spirit. Not only was he working long hours as a truck driver, he also started a successful steam cleaning business. Joel always made sure his kids helped out because he loved working and spending time with his family. Joel loved the long drives and exploring new areas. He traveled in style with his "tricked up" Freightliner condo. Many summers, Joel would take the family along his routes so they could explore most of the United States. During summer vacations Joel included the family on his trips and spent time exploring the states from New York City, Tampa, Chicago, and the list goes on. When the Freightliner hit the Texas border, they always found the nearest Whataburger. Joel also used his Freightliner as a volunteer during hurricane Charley and he volunteered countless hours to help the victims of Florida hurricanes. When Joel wasn't driving, he enjoyed a good barbecue with his family. In addition, Joel loved a good boxing match, a competitive game of pool, basketball, or football, and swimming. Joel was also very creative and artistic by nature and loved music and rewatching his favorite movies. Joel's legacy was his gift of storytelling. He had the funniest stories and could turn a boring tale into a hilarious adventure of a story. “Wait! You’re not telling it right” he would exclaim and then go off to exaggerate the tale. If he wasn't telling a story, he was cracking jokes, he loved seeing his family and friends happy. Joel knew how to make all holidays and special occasions more fun and memorable. Easter for the Torres family included water balloons, which would naturally add to the fun, and Christmas and New Year's were full of Joel's surprises. But his favorite holidays included fireworks, he would bring the largest fireworks find down from work trips. Joel was a great provider. He was fierce, yet gentle, and always generous. Joel would turn any frown upside down and lit up any room, not only with his natural ability to make people laugh but also with his wardrobe and style. He was well dressed and took his attire seriously, looking sharp for all occasions. His signature scent was Dior Sauvage. Joel is preceded in death by his father, Joel Torres Sr. He is survived by his loving wife and best friend, Mary, his mom, Teressa Torres, daughter, Jessica M. Torres, sons, Joel Torres III (Italy Perez) and Joshua Torres, granddaughter, Serenity Skye Torres, and brothers, Ernesto Torres (Elsa) Renee Torres (Rosa) and Ricardo Torres (Minerva), as well as his best fur-friends, Apollo, Rilo, and Gaia. Visitation will be Sunday, October 3rd, 1-9 pm, with a rosary at 7 pm, followed by sharing stories. Mass will be celebrated on Monday, October 4th, 10 am, at St. Joan of Arc Catholic Church in Weslaco. Burial will follow at Sacred Park Cemetery in Mercedes.

The family of Joel Torres Jr. created this Life Tributes page to make it easy to share your memories.

Send flowers to the Torres family.