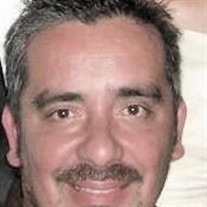 On June 17th, 1965, Juan Mata Jr. was born to Juan Mata Sr. and Leandra (Rodriguez) Mata in McAllen, Texas. After graduating from McAllen Highschool, Juan continued his education and earned an Associates Degree. He worked in IT most of his career, starting with Time Warner Cable, Spectrum. Juan worked for many years at Nurses That Care as an IT Coordinator but was very knowledgeable in the medical field. In addition, he was caring and showed genuine compassion to patients and co-workers. Juan was a loving father to his three kids. There was nothing he wouldn't do for them to ensure their happiness. Juan knew how to start up a conversation with anyone and, within minutes, have them laughing. That was one of his exceptional qualities. Juan loved to play golf and bestowed his love for the game to his children. He also loved his Dallas Cowboys and was a devoted fan. He would never miss a game. Juan was a talented photographer and videographer and started Matacasa Photography. He worked on this business after hours and on weekends and had built up a nice reputation and collection of photos and videos. Juan loved to BBQ with his kids and his family. He was a caretaker for his mother Leandra R Mata, who passed ten days before he did. He was devoted to his family and always ensured everyone had eaten and been taken care of. Juan also loved music, especially 80's rock. Anytime you would drive by Juan's home, 80s music was blasting, and it made him happy. When it comes down to it, he was all about his family, and we will all carry him with us in our hearts and our memories. His legacy will carry on with his three children. Juan is preceded in death by his parents, Juan Sr. and Leandra Mata. He is survived by his children, Valeria Isabel Mata, Jonathan Aaron Mata, and Madalyn Isabel Mata, siblings, Elisa Ortiz (Santiago), Estela Porter (Michael W. Porter Sr.), Maria Alicia Rodriguez, Reynaldo Rodriguez, Rosa Romero, Ramon Villalobos Rodriguez, and Ruben Rodriguez, and numerous nieces and nephews. Visitation will be Friday, February 4th, 1 pm-9 pm, with a rosary at 7 pm. Mass will be Saturday, February 5th, at Our Lady of Perpetual Health in McAllen. Burial will be private.

On June 17th, 1965, Juan Mata Jr. was born to Juan Mata Sr. and Leandra (Rodriguez) Mata in McAllen, Texas. After graduating from McAllen Highschool, Juan continued his education and earned an Associates Degree. He worked in IT most of his career,... View Obituary & Service Information

The family of Juan Mata Jr. created this Life Tributes page to make it easy to share your memories.

Send flowers to the Mata family.