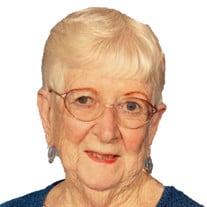 Mary Lou Johnston, 91, of Weslaco, Texas, died at 1:15 AM Saturday, February 20, 2021, at the John Knox Village Nursing Center in Weslaco, Texas with family by her side. Born December 31, 1929, in Burlington, Iowa, she was the daughter of Harold Levi and Lillian Maude Willson. On September 27, 1947, she married her first love, Dallas "Dal" Duane Johnston in Morning Sun, Iowa. He was her life-long sweetheart and partner. She was a 1947 graduate of Morning Sun High School and went on to beautician school in Burlington, IA. She worked many different jobs as a waitress, mail order specialist, and at the Iowa Ordnance Plant. She was most proud of her 32-year career as a machine operator at the Winegard Company from which she retired in 1992. She was a member of the Morning Sun Methodist Church, Grace Methodist Church in Burlington, and the First United Methodist Church in Weslaco, Texas. Mary Lou was a dedicated, loving, and caring wife, mom, grandma, great-grandma (Gigi), friend, and neighbor. She served as a role model to everyone she knew and cared about. She had a kind heart, looked for the best in everyone, and was dedicated to service. Mary Lou worked hard and made many sacrifices to provide for her family. She was generous and charitable to others. She had great faith and enjoyed life to the fullest. She revered and nurtured family, and never shied away from a challenge. She fulfilled God’s purpose and plan on earth. Mary Lou was always open to new hobbies and adventures. She loved to cook and was known for her legendary pot roast and vegetable soup. A favorite pastime was to knit and crochet afghans and blankets for her family. She once loved to read but that gave way to her iPhone and internet adventures. She enjoyed card and board games and would frequently entertain. She never missed a baseball or softball game when Dal would play. She loved to square dance and dance to all kinds of music, especially at the Eagles Club. Her favorite song was “In the Mood”. After her first cast to see if she might like to fish, she became an enthusiast. This led to many fish fry’s at the campground. Beginning with a cruise on their 25th wedding anniversary, Lou and Dal made many more trips together. They especially enjoyed cruises and learning about other countries. One year for Christmas she requested a moped. This gift led to a love for motorcycles. After retirement, she traveled with Dal to 47 of the 50 states and Canada on a Goldwing motorcycle pulling a trailer. They enjoyed visiting state capitals. On one of the trips, they discovered the Rio Grande Valley (RGV) and gradually transitioned to Winter Texans before relocating to Texas in 2004. Lou enjoyed listening to Dal play the guitar, which he learned in 2006, and never missed an RGV Jam Session where he would play, especially when one of his love songs was dedicated to her. Mary Lou's dedication to service in support of Lions International spanned 67 years. At first, she supported her husband Dal as a leader in Iowa Lions but later became a Lion member herself when she moved to South Texas. She was a shining example of true Lionism. This was evident through her frequent volunteering at Burlington Hospital, local food banks, tutoring work at local schools (HOST), and Aurora House. She is preceded in death by her parents and grandparents, and her sister Marilyn Wilson-Lefever. Survivors include her husband Dallas Johnston; two sons, Brent D. (Nanette) Johnston of Kingwood, TX and Rick W. (Sandy) Johnston of Montrose, IA; 7 grandchildren; 9 great-grandchildren; 2 great-great-grandchildren; and many nieces and nephews. Cremation has been entrusted to the care of McCaleb Funeral Home in Weslaco. A Celebration of Life will be held at the Donna Lions Club Golf Tournament in Weslaco, TX on March 27. A graveside service will be in Elwood Cemetery, Morning Sun, IA at a later date. In lieu of flowers, a memorial has been established for Donna, TX Lions Club (c/o Robert Janik, Treasurer, 2001 Citrus Drive, Weslaco, TX 78596). Prugh Funeral Service is in care of the arrangements. A photo tribute can be viewed and condolences can be sent to the family by visiting Mary Lou's obituary at www.prughfuneral.com.

Mary Lou Johnston, 91, of Weslaco, Texas, died at 1:15 AM Saturday, February 20, 2021, at the John Knox Village Nursing Center in Weslaco, Texas with family by her side. Born December 31, 1929, in Burlington, Iowa, she was the daughter of... View Obituary & Service Information

The family of Mary L. Johnston created this Life Tributes page to make it easy to share your memories.

Send flowers to the Johnston family.