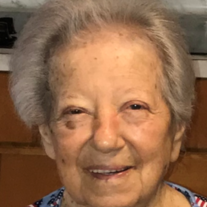 Angeline “Angie” Sesso Naccarato passed away in her home in Donna on December 7, at age 95.

Angie was born in Columbus, Kansas on October 3, 1924, the youngest of 3 children, to Mike and Josephine (Simone) Sesso. She lived in the small southeast Kansas Italian community of 42 Camp until 1930 when she moved to Santa Rosa, Texas with her father, mother, sister Mary and brother Tony.

Angie’s father and her maternal family moved to the United States from Paterno’ Calabro, Calabria, Italy at the turn of the 20th century.

When Angie was a young girl, her father called her “Peeps” and was his shadow. As a high school athlete, she was a softball pitcher.

Angie loved sitting on her porch with her dogs Mitsy and Maximus and watching the chachalacas, cardinals, hummingbirds, ducks, hawks, squirrels, bobcats and javelina.

. . . and she loved her (stuffed animal) Curious George.

For years, Angie and her sister Mary would talk on the phone nightly for an hour or so. What happened in those 24 hours since their conversation the night before that required another hour, we do not know. But it didn’t matter. Angie and Mary were close their entire lives and loved to spend time together.

Angie was always good; always kind and incredibly unselfish. She never asked for anything. Instead, she spent a lifetime sacrificing for her sons so they could have a better life. What mattered to her were her boys. And oh those wonderful southern Italian meals.

Angie was preceded in death by her husband Vic, her son Jerry, her father and mother Mike and Josephine Sesso, her sister Mary Stapper, her brother Tony Sesso and her beloved goddaughter Jennifer Polis.

Angie’s wish was to have a private family goodbye.

In lieu of flowers, a tribute gift may be made to Alzheimer’s Association in Angie’s name, if you so desire.

To order memorial trees or send flowers to the family in memory of Angeline Naccarato, please visit our flower store.