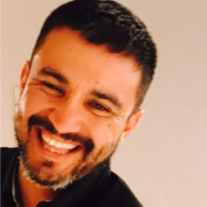 Benadad Sinai Gonzalez, 37, passed away on Sunday, December 1st, 2019. He was born on July 9, 1982, to Roman Gonzalez and Patricia Lopez in Brownsville, Texas.

Ben grew up in San Juan and graduated from PSJA high school. He was one of the most popular kids in school and was known for his congeniality and ability to light up a room.

After high school, Ben began a career in refinery work. He was a hard worker and was known for his knowledge and expertise.

When Ben was not working, he enjoyed cooking and spending time with his friends and family. Ben was a very generous person and was able to make friends with everyone. He was a true friend, one who would meet someone once, but help them years later. Ben enjoyed serving others, and he did this with love and laughter all of his life.

Visitation will be Saturday, December 7th, from 10 am-9 pm. There will be an hour of sharing at 6 pm and a prayer service at 7 pm at McCaleb Funeral Home Chapel.

To order memorial trees or send flowers to the family in memory of Benadad Sinai Gonzalez, please visit our flower store.