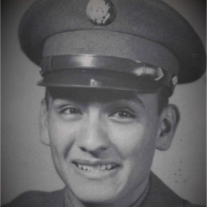 Weslaco- Felix Garcia, Jr. 88, passed away at his home on Monday, October 14th, 2019. Felix was born in Donna, Texas to Felix Sr. and Guadalupe Galvan Garcia. He was a Donna Redskin, but left school early to join the United States Army. After being honorably discharged, Felix became a plumber and eventually a Master Plumber. He ran his own business for the rest of his life.
Felix was very talented and smart. He taught many local plumbers their trade. His intelligence combined with his intense drive and work ethic were his keys to success. To say that Felix did not believe in retirement is an understatement. He worked well into his 80s and his work included digging trenches outdoors.

Visitation will be held on Sunday, October 20th, from 1-9 pm, with a rosary at 7 pm. Mass will be held on Monday, St Joseph Catholic Church in Donna, 11 am. Burial, with military rights, will follow at Rio Grande Valley State Cemetery.

To order memorial trees or send flowers to the family in memory of Felix Garcia, please visit our flower store.