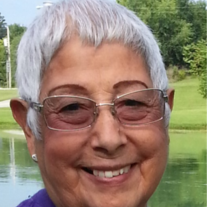 Weslaco/Harlingen- Minerva Rowe Dugger “Minnie,” 86, passed away on Wednesday, January 15, 2020. She was born on October 25, 1933, to Candelario Ortega and Emilia Guerra Ortega.

Minnie grew up in Weslaco, but moved to Illinois where she graduated high school from Yorkville, Illinois. She married Alan Rowe on April 22, 1956 and they raised four children together.

Many will remember Minnie from her many years with Progreso ISD, where she spent most of her career as a teacher’s aide. Minnie was friendly and never met a stranger. She always had a smile on her face and had a bubbly cheerful personality. Minnie loved traveling in her spare time, shopping, and especially dancing. She began dancing at a young age.

Minnie was baptized as one of Jehovah’s Witnesses on May 20, 1973. She spent the next forty six years preaching and teaching, being a Regular Pioneer for twenty years. She was very passionate about spreading the word. Her weekends and evenings were usually spent at the Kingdom Hall or out witnessing to many.

To order memorial trees or send flowers to the family in memory of Minerva Rowe Dugger, please visit our flower store.