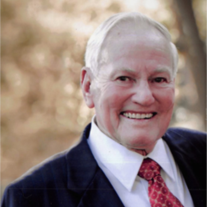 WESLACO - Paul Joseph Heller, Jr was born March 14th, 1934 to Paul and Anna M. Heller. He grew up in Weslaco with his sister, Mary Ann.

He knew early on that he wanted to farm and started just after high school. He met his partner for life, Jeanette, at a mutual family friend’s wedding. They were married November 19th, 1960 and were blessed with five children, sixteen grandchildren, and two great-grandchildren.

Joe and Jeanette were devoted to their Catholic faith serving on many ministries: marriage preparation classes, support of faithful tithing, and years of sharing their relationship as Marriage Encounter speakers.

They both enjoyed traveling across the country and took many trips to camp, fish, and they spent many memorable summers in the mountains of Colorado.

Joe served in the Army and was an accomplished farmer. He was awarded the State Association of Young Farmers of Texas’ Area X Star Young Farmer in 1967 and served on the Hidalgo and Cameron County Irrigation District #9 Board of Directors for thirty years. (1971-2001).

He will be most remembered for his kindness, his generosity, and his strong belief in being charitable. Joe exemplified all of these as he honored the love he had for Jeanette by caring for his wife for 15 years as she battled Alzheimer’s at their home in Weslaco.

Joe and Jeanette were a great example of how to live and especially how to love. They provided their children and grandchildren the greatest “playground’ ever which led to some of the best memories of running through the citrus groves.

He peacefully passed on August 28th, 2019. We truly believe he and mom are together enjoying each other’s’ company once again.

Visitation will be held on Sunday, September 1, 2019, from 4:00 pm to 9:00 pm with a 7:00 pm Rosary at McCaleb Funeral Home in Weslaco. Funeral Mass is scheduled for Monday, September 2nd, 2019, 10:00 am at St. Pius X Catholic Church in Weslaco. Interment will follow at Highland Memorial Park.

Flowers are welcome and memorial contributions may be made to the Alzheimer’s Foundation at Alz.org.

To order memorial trees or send flowers to the family in memory of Paul Joseph Heller, please visit our flower store.