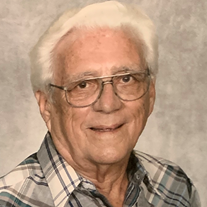 Mr. Brautigam graduated from Milton High School, completed 2.5 years of college then served three years in the U.S. Navy. Upon his return home, he and his wife, Audree Brautigam, were the owners of a family business, Broadway Hardware, in Milton, PA, for approximately forty years. They attended the Church of Christ in Milton, PA. They enjoyed traveling upon retirement. Then, they moved to Victoria Palms in Donna, TX. Ralph was active in the Elks Lodge, Weslaco, TX, for many years. His wife, Audree, passed away in 2006.

Ralph continued to be active in various community activities, friends, and family. He and Mildred Alewine were married on February 22, 2008, in Donna, TX. She resides at their home. They are members of the Love of Christ Luthern Church, 914 West Third Street, Weslaco, TX 85796. Memorials may be made to the church. The family requests no flowers, please.
To order memorial trees or send flowers to the family in memory of Ralph Brautigam, please visit our flower store.