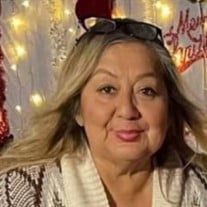 HARLINGEN -Harlingen: Silvia Ramirez Reyes, 61, passed away on Saturday, September 17, 2022, at Valley Baptist Medical Center in Harlingen. Silvia was born on April 30, 1961, to Moises and Eduvijes (Reyes) Ramirez in Mexico. Silvia had four children and was a single mother. She exemplified her work ethic and love for her family, working multiple jobs to provide for her family. Silvia’s kids had everything they needed because mom sacrificed as much as possible.

Once her children grew up, Silvia enjoyed traveling & loved going to casinos and having Loteria nights with family and friends.

Silvia was also a great homemaker. She enjoyed cooking, and her recipes were always unique. Silvia also kept a beautiful garden and enjoyed her time outdoors. She was a lot of fun and always had a good joke. Most of all, Silvia earned the respect of her children, and they all heeded her advice. She was a great listener and spent many late nights having deep conversations with her children. Her children and grandchildren will always treasure Silvia’s guidance and love.

Silvia believed in God, and her faith was apparent throughout her life.

Silvia is preceded in death by her parents, Moises and Eduvijes Ramirez, and her daughter, Melba Aguilar.