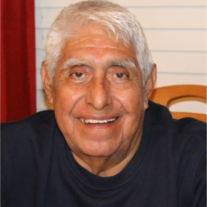 Tomas Perez was born in Elsa, TX to Baldomera Cisneros Pérez and Vicente Pérez on December 29, 1932. He went to school in Edcouch - Elsa, TX. He married Teresa Puente Pérez on December 28, 1958. in Weslaco, TX. He attended Pan American University. He worked as Elsa, TX Housing Projects Director, worked at Texas Plastics, was a Photographer & Owner of Pérez Photography and was owner/manager of Ballard Trailer Park in Weslaco, TX.

In his early life, he was involved and was a member of the Knights of Columbus.

Tomas Perez is preceded in death by his son Miguel Angel (Mike) Pérez, his parents, and his brother Manuel Perez.

Tomas was a man of deep faith. He loved his family and was most proud of his children and grandchildren, they will be his legacy.

The family of Tomas Perez wishes to extend our sincere thanks to Encompass Hospice, San Antonio, TX and his caregivers Trini & Diane.

Funeral arrangements are under the care of McCaleb Funeral Home of Weslaco, TX.
To order memorial trees or send flowers to the family in memory of Tomas Perez, please visit our flower store.